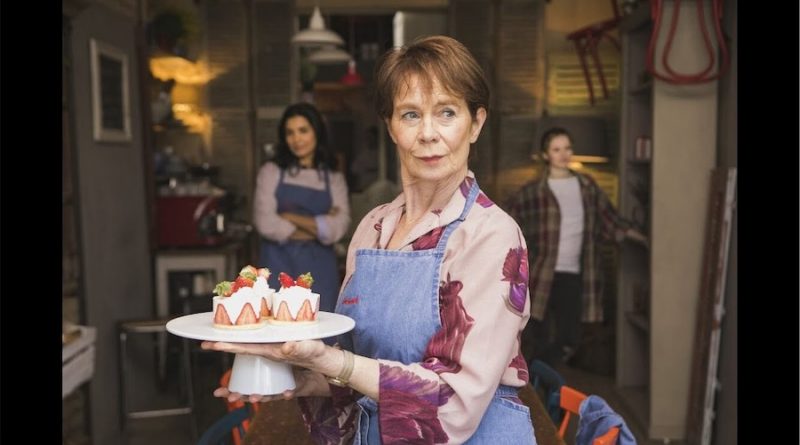 Warm. Sweet. Comforting. Easily digestible. All four terms regularly apply to baked goods and, often, also to British comedies. In the case of tasty cakes and pastries, the quartet of descriptors can never herald trouble. With culinary-focused film Love Sarah, however, it’s possible to embrace those traits a little too heartily. The feature debut of director Eliza Schroeder, this London-set affair is perfectly pleasant, but also adheres firmly and noticeably to an evident template.

Love Sarah’s ingredients will be recognizable to anyone who’s previously seen any lightly amusing, dramatic and romantic movie about the intersection of food and grief, of which there’s many. The same applies to any film about simply banding together to launch a new eatery against the odds, or coping with a loss by paving a new future path. The catalyst here: the death of chef Sarah (Candace Brown), which leaves an imprint on her estranged mother Mimi (Celia Imrie), her daughter Clarissa (Shannon Tarbet), and her best friend and business partner Isabella (Shelley Conn). The recipe for healing: forging ahead with the bakery that Sarah and Isabella were planning to open, and enlisting Mimi, Clarissa, and Sarah’s chef colleague and former lover Matthew (Rupert Penry-Jones) to assist. The easy-to-anticipate complications: Mimi’s unresolved anxiety and guilt over her strained relationship with her now-deceased daughter, Clarissa’s yearning to know who her father is and carefree eagerness to pivot away from being a dancer, and Isabella’s reluctance to employ the notoriously caddish Matthew, as well as the difficulty of luring in customers when the store opens its doors.

As penned by fellow first-timer Jake Brunger — based on a story by him, Schroeder and Mahalia Rimmer (short TV series The Cut) — Love Sarah rarely dares to deviate from the expected formula. Falling from a set mould isn’t always an issue in general, including in heartstring-tugging comedies, but it robs the film of complexity. When characters cycle through a series of routine and predictable actions, after all, it’s hard to demonstrate depth beyond the obvious. That isn’t a criticism of Imrie, Tarbet or Conn, but recognition of the material they’re working with. Indeed, all three actors make the most of their roles, especially Imrie, even if they never feel as though they’re stretching their talents.

As well as its gentle, snug visuals and abundance of enticingly lit food shots, Love Sarah’s by-the-numbers nature also extends to its main thematic focus: its multi-generational trio of women connecting and helping each other as they all experience a time of need. While always a situation worth exploring, the film merely adopts the same approach it uses elsewhere, leaning on familiarity as its foundation. There’s something to be said about a movie about tragedy and change shaping its contents in a cozy, identifiable manner, and providing the kind of structure and certainty in almost every aspect that its characters are equally lacking and desperate for. But Love Sarah frequently also feels as if it’s ticking boxes, narrative-wise, as well as mining drama from easy scenarios.

That said, one aspect of the film is both well-worn and engaging, with Isabella, Mimi and Clarissa’s bakery — which is called Love Sarah, naturally — tailoring its menu to London’s multicultural residents. Cue matcha pancake stacks and Australian lamingtons, as well as plunging into the deepest reservoir of emotion that the movie possesses. Love Sarah is by no means the first to broach the idea that food bridges cultural gaps, but there’s genuine tenderness and enthusiasm in scenes involving its new range of dishes. Otherwise, the feature goes down nicely and smoothly, yet proves oh-so slight.