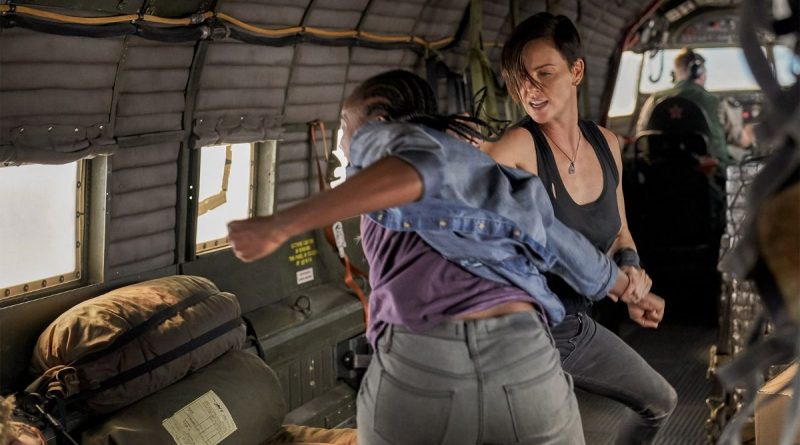 Director Gina Prince-Bythewood is best known for her two great romantic dramas Love & Basketball (2000) and Beyond the Lights (2014), both richly textured relationship-driven films. So it’s quite a departure that she’s directed an action thriller. Superhero fans shouldn’t worry, through. There are plenty of bloody fights, often with medieval weapons, and general mayhem to satisfy genre convention. But Prince-Bythewood brings human drama to the superhero characters and real world complexity to The Old Guard which starts streaming on Netflix July 10. The film also gives Prince-Bythewood the distinction of being the first Black woman to make a high profile superhero film.

Adapted from the 2017 graphic novel by Greg Rucka who wrote the screenplay, “The Old Guard” is a small band of immortal warriors who miraculously, and against their will, heal from lethal wounds. They’ve survived for centuries, fighting the good fight by wielding superhuman havoc on the bad guys.

When the film opens in present day Morocco, they’ve been called to perform a dangerous rescue of kidnapped young girls in Africa. It’s a job for “the boss” who is none other than Charlize Theron in full badass mode. Her Andromache the Scythian (aka Andy) arrives on the scene in black shades, jeans, T-shirt and punk haircut and reluctantly assumes her natural leadership role to the relief of her fellow mercenaries who are all given interesting backstories.

There’s the always interesting Matthias Schoenaerts (The Mustang) as Booker, who was killed while fighting for Napoleon and who has the downbeat demeanor of a man who knows he’s live far too long; swarthy Marwan Kenzari, best known so far as “hot Jafar” in Aladdin, is Joe who dueled with Nicky (Luca Marinelli) in the Crusades. They have been lovers through the centuries, a point Joe makes with a stirring retort during a sequence when he and Nicky’s captors make an ignorant joke.

They are central to the refreshing inclusivity of The Old Guard which continues with the robust addition of young Marine Nile played by KiKi Layne, who earned deserved acclaim for If Beale Street Could Talk. She’s terrific this time, too, as Nile discovers her regenerative powers after getting killed by the Taliban in Afghanistan and waking up in a hospital bed fully healed. Nile is the stand-in for the audience. Frightened and alone, she is drawn to the old guard, her natural new family, but frightened by what it means to accept her new reality.

The convoluted plot turns to the dastardly Merrick (Harry Melling) who, in spot-on modern villain fashion, own a pharmaceutical corporation. He wants to harness for profit the immoral genes of the old guard. He’s helped by Copley, played by the great Chiwetel Ejiofor, who brings a soulful gravitas to a character who shifts from stock villain to conflicted man with a tormented past. Of course, even a CIA operative touts the requisite giant bulletin board spelling out, in headlines and photographs, the histories and backstories of each member of the old guard as if a bureaucrat in the 21st century would still organize files in such a low-tech manner.

But no matter. Prince-Bythewood stages the many action and fight scenes with lightening-quick finesse and she gets dynamic performances from her entire cast. But the heart and soul of the movie is Theron, gleefully believable as a 6,000-year-old warrior who’s saddled with a ghost that will no doubt figure in the next installment of this franchise. Theron is as fierce as she was in Mad Max: Fury Road and Atomic Blonde but still manages to reveal Andy’s pain and weariness at having to battle humanity’s ignorance and injustice again and again and again.