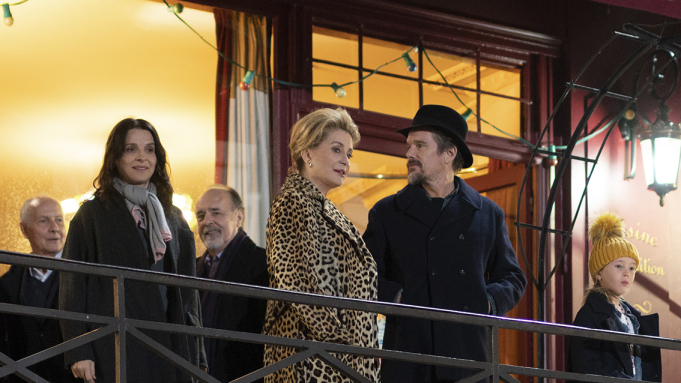 Truth to tell, this story might have been more promising on paper than it turned out on film. Certainly, the cast promises more than any of the stars deliver. The director, Hirokazu Kore-eda, became known last year for his film Shoplifters. Those who thought that movie was overblown should not expect much from The Truth.

Again, the story has possibilities. The protagonist Lumir writes screenplays. Her mother, Fabienne, is — was, really — an actress who always put her career before her daughter. So when Lumir comes home to celebrate the publication of her mother’s memoir, she is ready to applaud the work.

Then she reads it. The daughter in the words is not anyone the daughter in the family recognizes in her mirror. The daughter on the page is the one her self-centered, posturing mother conjured out of words and wishes. Of course, the real Lumir is furious, and of course, Fabienne is defensive and cowardly and unmaternal. How could she be anything else?

The hard part is seeing Catherine Deneuve as Fabienne, all flounce and flow, her feet barely touching the ground of her fabulous estate. Deneuve would seem right for this part by her age and expertise, but she is doing what she can with what she has in Koreeda’s and Ken Liu’s script, based on the latter’s short story.

The same challenge goes for Juliette Binoche as Lumir. That character wrests all the sympathy in the plot, but Binoche cannot wring much out of the dialogue, fierce as it can be. The third party to these scenes is Lumir’s husband, Hank, a third-rate actor played by the first-rate Ethan Hawke. Hawke stays in his place, but it’s painful to watch him back there. One longs to see him rise out of the morass of mother/daughter calumny — not to fix things, not to take over, but to be our eyes, perhaps, our witness.

The weak writing, fumbling directing, and scene-chewing acting are ground up into to soap opera in the end. It’s not fun to witness this family drama or exemplary. The Truth is stressful without the resolution of setting an example. It is playing currently on IFC.