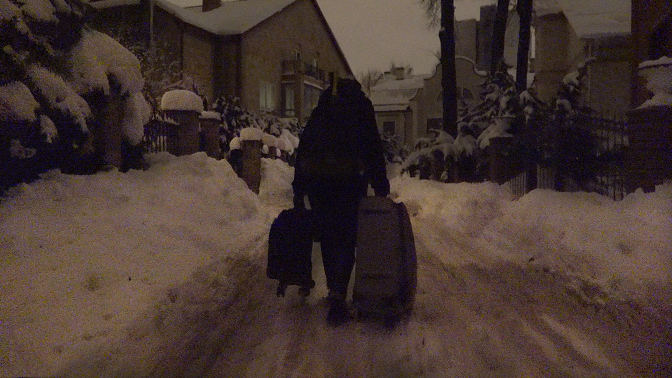 At times difficult to watch because of brief but graphic footage of inhumane, secretly recorded attacks, the film also documents the heroism and risks taken by an activist group. They aid gay men physically assaulted, one despairing and slitting his own wrists but medical help can’t be called. Lesbians face terrorizing threats and sexual coercion by those who know. With peril to their own lives, activists smuggle endangered victims out of Chechnya, often through Moscow and then, through humanitarian visas or political asylum, on to safer countries, though over the two years this film covers (2017-2019), none have come from the U.S.

At this year’s True/False Film Festival in Columbia, Missouri, director France explained the technical challenges to disguise his subjects for their safety. With that foremost in mind, while also wanting to convey the emotions of these endangered victims, France turned to a clever, cutting-edge digital solution. Faces of twenty-two New York volunteer activists overlay those of all the men and women so courageously speaking out, and the technology works flawlessly. When Maxim appears as himself testifying against this regime of hatred, the astonishing protective facial overlay becomes impressively clear. And when the real Maxim and his partner joined France on stage at True/False, thunderous applause greeted them along with a fair amount of tears.

It’s difficult to overstate the harsh, inhumane violence this film reveals. Yes, it’s difficult to watch. But to turn away is to ignore terrorism. The documentary Welcome to Chechnya is available on HBO.