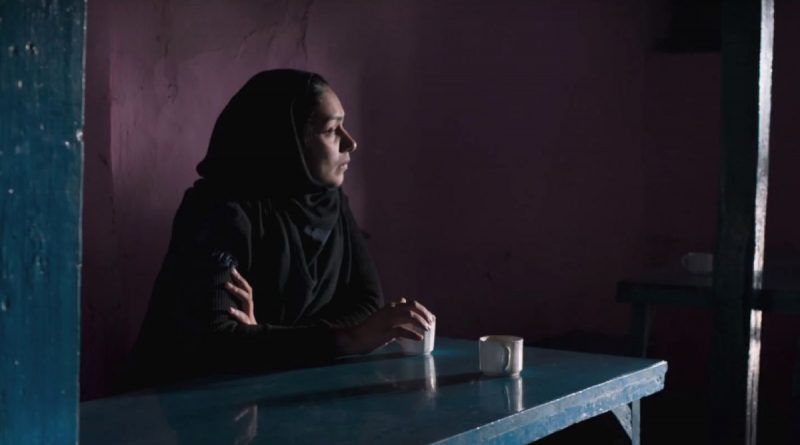 Writer and director Praveen Morchhale’s award-winning drama Widow of Silence is a languorous study of a woman done wrong. Thanks to the incredible cinematography of Mohammad Reza and Jahanpanah, Kashmir’s Dras valley is brought to life in this Urdu language film. We learn about a “half-widow” who has reached the end of her tether, netting a shocking twist at the film’s end.

To fully appreciate the mise en scene set for the lead character Aasia (Shilpi Marwaha) it helps to do some homework on the recent political history of Kashmir.

This spectacular terrain is now free from British rule (since 1947) and the area has an ethnically diverse primarily Islamic culture with its own English-infused language and customs.

Kashmir is found in the Himalayan region. It is poor, arid, cold, and full of remarkable scenery. Nestled between India and Pakistan, Kashmir is still like a football in play between these two countries but it is considered part of India. Pakistan is predominantly Muslim, India is not.

Our subjects in Widow of Silence are quite pious in their devotion to the Quran and traditional Islamic cultural ways, especially with matters of marriage and women’s place in society.

This political conflict has, for various unpleasant reasons, taken away men from small villages. The women are in limbo and face bureaucratic nightmares with the burden of proof squarely on them to prove that their missing spouse is dead.

Otherwise they cannot remarry or claim any land ownership. Stigma abounds too, especially for the children of these “half-widows,” stuck in a limbo-like status of married, but really on their own.

Our central character is Aasia, a woman in this predicament whose husband is gone. Praveen Morchhale’s drama gives us a fly-on-the-wall view of life in a village such as Aasia’s, and what she must put up with and live with in her day-to-day life.

She must care for her mother-in-law who exists in a shocking self-imposed veil of silence and stoic martyrdom over her son leaving, and she must also manage her angry 11-year-old daughter Inaya (Noor Jahan) who acts out in school, fighting with other girls who call her names. Aasia is trying to eke out a living as a nurse to put food on the table.

But it is the conflict that drives the interest here, as Aasia also deals with a paper pushing malignant creep (Ajay Chourey) in a faraway “government” office who spins her wheels and ultimately goes too far in his corrupted pursuit to compromise her. The ride to his grim office is punctuated by the companionship and conversation with a loquacious and joyful cabbie (Bilal Ahmad) who is always praising the good and making light of the horror around them.

Delhi actress Shilpi Marwaha delivers Aasia’s character with surgically precise spoken lines. Mostly the dialogue for all appears to be couplets from poems, Quran passages and Islamic clichés that involve God and the ups and downs of life in some form or fashion.

Nobody seems to have real conversations except when Aasia’s father tells her just like it is regarding her chance at remarriage.

There is no sugarcoating this, their culture is not female-friendly. It is theirs and we can respect that, but through western eyes, this misogynistic air that Aasia breathes daily would choke any of us if we were placed in the middle of it.

The story is about the oppressed woman who can rise and fight back, if driven to do so. The themes of a man in a power position taking advantage of a compromised and culturally repressed woman are common, but it is the strength of one woman’s fight done in her way that appeals here in this film.

Widow of Silence reminds us that the world is not at all a safe place for women. Some places are far worse than others. And in what appears to be a hopeless situation, the subtlety of Aasia’s resolve and plan of action makes Widow of Silence an interesting and glimpse into a world few Americans will likely ever see in person during their lifetime.