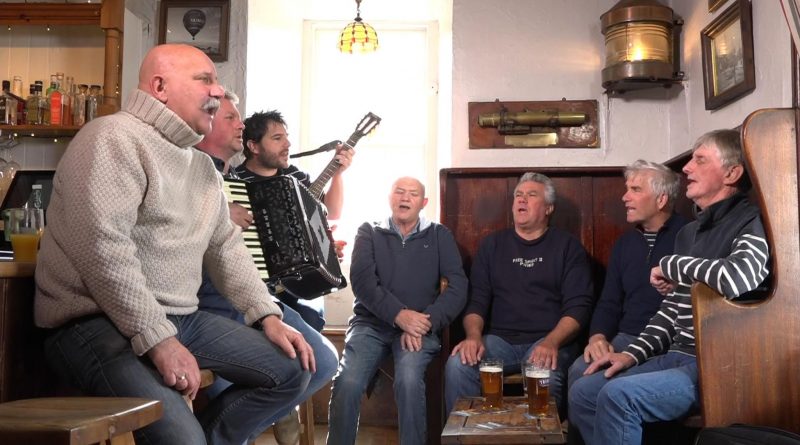 If you enjoyed The Full Monty and Calendar Girls and you’re looking for a charming, uplifting, British romantic comedy with a surprising emotional wallop, find Fisherman’s Friends on VOD..

Inspired by a true story, it begins with four London music biz executives on a weekend stag getaway in the bucolic village of Port Isaac in Cornwall. When they hear a hearty group of local fishermen sing a cappella sea shanties on the waterfront, Danny (Daniel Mays) is immediately entranced.

As a cruel prank, his cynical friends convince him that he should sign them to a recording contract. But the skeptical Cornishmen don’t take him seriously. Since they value friendship and community above all, their spokesman Jim (James Purefoy) dismisses Danny’s offer, saying, “We have no need to sell our souls for fifteen minutes of fame.”

But Danny is persistent, particularly since he’s attracted to Jim’s daughter Alwyn (Tuppence Middleton), who runs the B&B and is the single mother of young Tamsin (Meadow Nobrega).

When Danny finally convinces the reluctant fishermen, his friends can’t believe he fell for the joke: “Do you really think we’d sign a buoy band with the combined age of 643?”

Nevertheless, Danny persists, convinced, “In a world saturated with manufactured pop bands, the fishermen are a real catch!”

The rest is music history. After signing with Island Records, the Fishermen’s debut became the biggest selling traditional folk album of all time. The weaknesses of the film lie with writers Nick Moorcroft and Meg Leonard, who don’t give director Chris Foggin a full roster of clearly delineated characters and succumb to a formulaic, underdog structure.

Fortunately, all members of the original band have cameos and are serve as consultants. Now, almost 30 years later, the Fisherman’s Friends still sing at the Golden Lion pub on the “platt” (harbor) in Port Isaac during the summer months.

On the Granger Movie Gauge of 1 to 10, “Fisherman’s Friends” is a salty 7, a gentle gem that’s filled with engaging sea shanties.