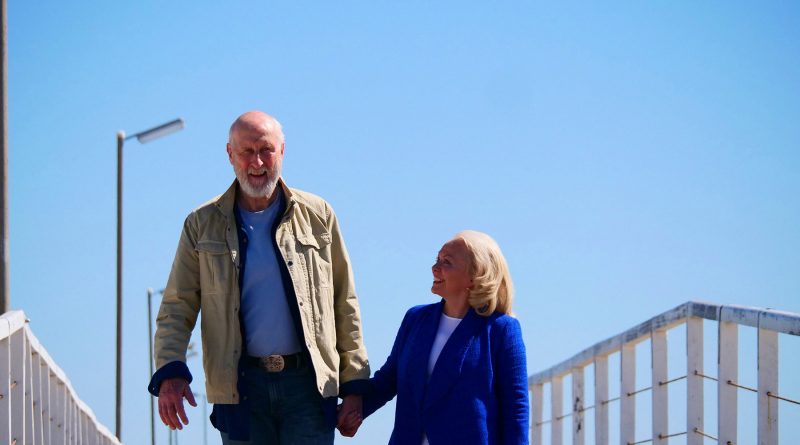 Originally due to release in Australian cinemas in April until the COVID-19 pandemic hit, and now reaching the US via VOD, Never Too Late arrives on screens with a sense of deja vu. That isn’t intentional. Indeed, if the Aussie movie’s theatrical plans had progressed as initially scheduled, it’d be the subject of rather than the cause of such a feeling. But unfurling an ensemble-led tale of ageing Vietnam veterans engaged in a caper linking back to their war service after Spike Lee’s Da 5 Bloods has already done the same, the comparisons were always going to be inevitable.

Set in a nursing home in Adelaide, Never Too Late is a completely different film, unsurprisingly That said, its adherence to genre — that’d be the formulaic ‘senior citizens relive their glory days via one last cheeky hurrah’ genre, as populated by heist movies Going In Style and King of Thieves of late, and by cheerleading comedy Poms — and cliche is blatant. Director Mark Lamprell has the also template-driven Goddess and A Few Less Men on his recent resume, and continues to remain true to his own form here.

Fifty years after the war, and with just as long passing since Jack Bronson (James Cromwell) and Norma McCarthy (Jacki Weaver) last crossed paths, the American ex-solider and Australian ex-combat nurse find themselves in the same facility. It isn’t accidental, with the spry, enterprising Jack faking a stroke to move into the Hogan Hills Retirement Home for Returned Servicemen and Women, and finally reuniting with his long-lost love his ultimate plan. But no sooner has the couple shared the same corridor than Norma is transferred to a different facility — to take part in a clinical trial to treat her early-stage dementia. Jack isn’t permitted to simply leave, though, despite his obvious subterfuge. Deemed a danger to himself and others, he’s forced to stay; however he remains as determined as ever to re-stoke the flames of love.

In one of the film’s many convenient coincidences, Jack’s three closest wartime colleagues — the other members of an American, Australian and British group known as the Chain Breakers, notorious for their actions in conflict, and held prisoner for a year as a result — are all residents of the same institution that Jack must now call home. Cue another reunion, this time with Alzheimer’s-suffering former Australian Rules footballer Angus “Screw Loose” Wilson (Jack Thompson), the wheelchair-bound James Wendell (Roy Billing) and the still-slippery Jeremiah Caine (Dennis Waterman). Cue a revived quest to earn a happy ending with Norma with the whole gang’s help as well. The nuts and bolts of the breakout plot (cringe-inducing codename: Operation Skippy), including the involvement of teenager Elliot (Zachary Wan), a “no excuses, no regrets” motto, multiple passes at their scheme and the commandeering of a hearse, are as routine as expected from there. So too is the late devolving into a sunny-hued scenic advertisement for the film’s setting — being Adelaide, it comes complete with a stint of high-stakes antics at an AFL match — as has become standard to the point of being obligatory in Australian comedies.

For a movie that exclaims its championing of senior citizens in its moniker, Never Too Late also leans heavily on age-centric jokes — the type that don’t quite convincingly laugh with rather than at the feature’s target market. Decrying technological advancements and bodily failures sit side by side with a well-intentioned but never deep or nuanced pondering of the treatment society affords the elderly, including via the fenced-in parallels between the Chain Breakers’ current home and their time as POWs. And, while fellow 2020 Australian film Relic offers a smart and superbly effective horror-fuelled rendering of an elderly woman’s physical and mental deterioration, Never Too Late gives the topic of dementia a far less thoughtful, more cursory treatment.

Without its two biggest stars, however, Never Too Late would be even flimsier. It’s still so overflowing with tropes that it feels like it has been written on autopilot — in its story, jokes, visuals and themes alike — but Cromwell and Weaver give their characters more spark than would’ve occurred in other hands. They also prove genuinely tender in their brief moments together, even if their backstory of decades-old yearning is yet another of the movie’s oh-so-typical elements. As for Thompson, Billing and Waterman, plus Aussie veteran Max Cullen and the seemingly also obligatory Shane Jacobson (nary an Aussie comedy is made without him), they turn in performances minted from the same mold as the film overall: by the numbers.