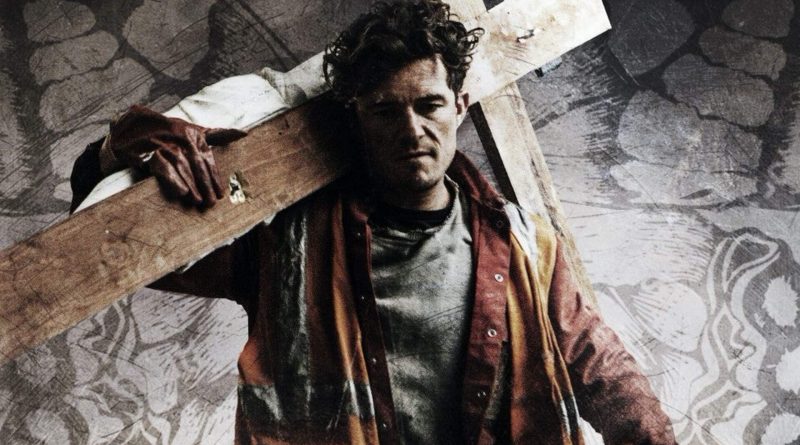 Stark and sobering, Retaliation stars Orlando Bloom as Malky (Malcolm), an angry ex-con who seems to adore his mother and habitually kicks back with his working class mates at the pub. Until the cracks in his veneer expose the root causes of his shockingly violent and volatile behaviors.

Time does not heal all wounds, and for some it exacerbates them when never dealt with head on. In Malky’s case, there is more than one primary villain in his story.

There is also the betrayal of trust from the one person who should have believed him as a 12-year-old boy: His mother, played by the excellent British actor, Anne Reid.

Unlike her bubbly and loving maternal character in Last Tango in Halifax, Reid portrays this drawn tight, flawed mother with such a subtle ferocity that it is imperative to single out her performance.

Orlando Reid is a massive blockbuster film star; he is a bit unexpected in this tortured smaller role which makes his performance more powerful. His Malky is angry, and we soon learn why.

How Malky deals with his anger and ultimately saves himself as opposed to doing the predictable thing we expect of him is what makes Retaliation a much more interesting version of the well-worn plot of those who’ve been wronged getting their visceral due and revenge.

Directors Ludwig Shammasian and Paul Shammasian have laced their film with visual metaphors, as Malky is part of a wrecking crew that is dismantling an old church. He is tasked with taking down Christ and this act of Malky having to carry the cross is emblematic of the guilt, shame and anger he carries decades after a horrific event that changed him forever.

The tagline for this film tells you 95% of what you need to know going in. “An adult victim of childhood sexual abuse confronts the horrors of his past.”

What it does not tell you is the horrors of any child losing their faith in their parents, or in Malky’s case just his mother. It does not tell you the manifestations of abuse as a child matures, unable to get the help needed to unravel their psychic pain. It does not tell you the ‘whys’ of the abuse, just the outcome and the collateral damage that piles up in a damaged soul’s life. Specifically, this line of dialogue, spurred by his mother repeating something she said to him just after the incident and then once more to him as an adult. Spitting back her query, Malky says: “Remember when I was 12, mum? You said, ”You’re not right, I can see it in your face, your face is tight!”’

And in the end, the adage that “revenge is a dish best served cold” is usurped by a biblically inspired verse (Romans). This Herculean act and leap of faith allows the victim to transfer pain and guilt to the perpetrator by laying down and giving over their anger to a greater power.

No spoilers here, but what that means for Malky is the ultimate vengeance against his perpetrator (the priest, played by James Smillie), is one that allows him to hold his head up high once again.

The story dramatically stitches together in the shock ending for which we will not discuss here, but Malky’s salvation comes in this jarring twist.

Perhaps in the act of forgiveness, the life he should be living will be restored to him.

This is a tragic and all-too-true story that many people live with in reality. The filmmakers and actors were brave to tackle this difficult subject with a respectful theatrical turn that honors those who suffer in real life.