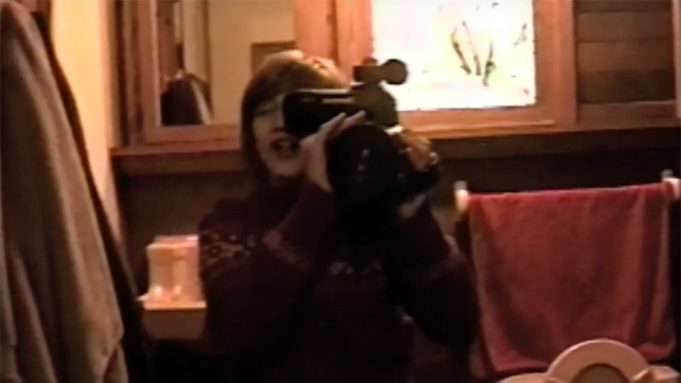 Shot on VHS and Betamax, and presented as an ‘80s-era video mixtape of family footage and taped-off-television segments, there’s a flaw in VHYes’ gimmick that’s obvious from the start. It’s also a leap so crucial to the film that the whole thing would crumble without it, including its emotional payoff. That speaks volumes about this purposefully scattershot comedy. Directed by Jack Henry Robbins, VHYes is so enamoured with its concept that it eagerly massages a key detail to make the movie come to fruition. In a feature that’s gleefully, overtly, undeniably farcical — it’s filled with parodies of pornographic, aerobics and home shopping, after all, as well as over-the-top cameos by Tim Robbins and Susan Sarandon, the filmmaker’s parents — that’s probably to be expected, but it’s also distracting.

When the pre-teen Ralph (Mason McNulty) receives a camcorder for Christmas in 1987, he’s thrilled. He’s also eager to both film and record everything that he can. Grabbing the first VHS tape he can find — his parents’ (Jake Head and Christian Drerup) wedding video — he starts immortalising his daily life on tape, including playing with his dinosaur toys, palling around with his best friend Josh (Rahm Braslaw), and the evident tension in his mother and father’s marriage. Although warned away from watching late-night TV, he sets his camera up to capture the wackiness broadcast after darkness hits, too. Running from the most festive day of the year until New Year’s Eve, Ralph’s tape splices all of the above together, with parts of the recorded nuptials remaining in the gaps.

In the latter aspect of the film, VHYes’ willingness to play fast and loose is apparent: recording on VHS doesn’t typically leave portions of the video’s underlying material intact. With the movie using the breakdown of Ralph’s parents’ marital bliss to not only add resonance, or to ponder the idea that the arrival of a child erases a couple’s status quo, but as part of its big finale, it’s a necessary move — but it’s also the kind of cheat that’s emblematic of taking the easy option. Comprised of sketches and vignettes choppily edited together, everything about VHSYes’ gags smack of ease, and of running with a first draft. The younger Robbins has played in this terrain before with his 2017 shorts Painting with Joan and Hot Winter: A Film By Dick Pierre, which both pop up here, so he has spent time with the material; however, with co-creators Nate Gold and Nunzio Randazzo, he crafts a feature that rests on an idea that sounds funnier in concept than in execution.

That’s not to say that VHYes doesn’t have its moments. Starring the recognisable likes of Thomas Lennon as a shopping channel spruiker, Mark Proksch as an Antiques Roadshow-style expert, Charlyne Yi as a low-fi music show host and Kerri Kenney as the face of both Painting with Joan and Sleeping with Joan, many of the movie’s absurdist, ridiculous individual skits serve up laughs — and they’re as bizarrely engaging as they’re meant to be. And, VHYes boasts smarts, too. Focusing its faux softcore porn segments on combating global warming and anti-immigration sentiments is savvy, and satirising closed-mindedness and bandwagon-jumping via a true crime-esque expose of a sorority tragedy is clever as well. The film’s talk-show segment on ‘tape narcissism’ — aka the idea that humanity will start recording every element of our lives, to the point that it changes our relationship with the reality of our daily lives — also ripples with pointed (albeit obvious) bite and relevance.

Still, this entertaining-enough but also often clunky lark of a movie always feels like just that — a fun idea compiled with more enthusiasm than finesse or contemplation, as though cobbled together while flipping channels. That’s why the imperfect wedding video gimmick is so glaring, too, and so noticeable. VHYes is supposed to be chaotic, offbeat, kitsch and experimental, of course, and it leans into that happily off-kilter vibe with aplomb. It’s supposed to offer an ample dose of coming-of-age heart as well, which young McNulty and Braslaw deliver. But it also feels as disposable as the content that it’s lampooning, and sometimes as thin, even when it’s aiming to delve deeper in its own messy, silly way.