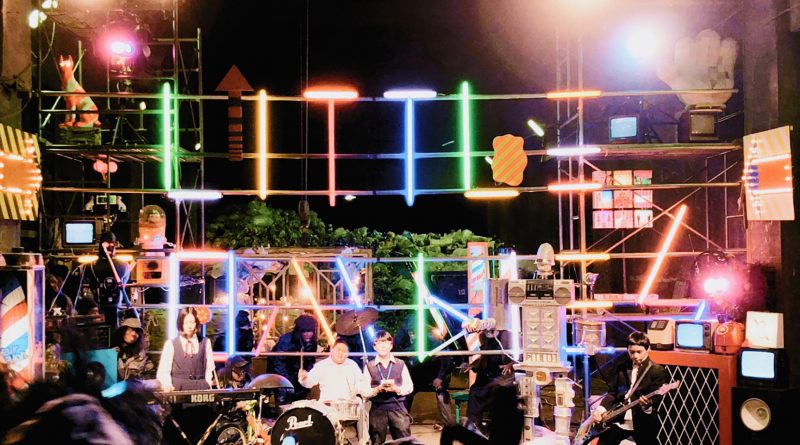 When newly orphaned children have rapid-fire dialogue poking fun at each other at their respective parents’ funerals, you know you’re in for a weird and wonderfully brilliant two hours.

The script of We Are Little Zombies is deeply twisted. It’s a bit like a ride through the Willy Wonka psychedelic tunnel of terror — but quirkier. With mixed-media scenes, heightened sound mixing, and kitschy wonder We Are Little Zombies is a pure delight in its unique style of storytelling. It’s not until you get about 15 minutes in to the film that you hit the opening title sequence (which should win an award as a stand-alone piece) and you fully grasp that the film’s structure is told in video game chapters. Welcome to writer/director’s Makoto Nagahisa’s mind.

The script is much more complex than it might at first appear to be. It tackles the issues of coming to terms with death and finding your own voice. These arise it just so happens by fluke, with the formation of a pop band by kids who are running from manipulative adult supervision. Our four 13-year-old leads have that genuine kid friendship chemistry. Each of the kids gets their own tragedy told with humor and each revels in breaking the fourth wall. These young actors are as whip-smart and energetic as they need to be to reach audiences. Surrounded by supersaturated settings, the audience is subconsciously reminded of the video game aspect outside of the film’s many blatantly adorable moments.

You will be unable to disengage, despite what might feel at first glance like a lengthy runtime. The film provides such an interesting way to explore abuse, neglect, childhood depression, and general darkness. It’s truly one of the most imaginative films. We Are Little Zombies will be on my Top 10 Films of 2020 list. This is a call to all other filmmakers to step up your game. We’re already halfway through this dumpster fire of a year and if you want your film to have as much buzz as this film deserves, you’ve got your work cut out for you. You can see We Are Little Zombies from July 10.