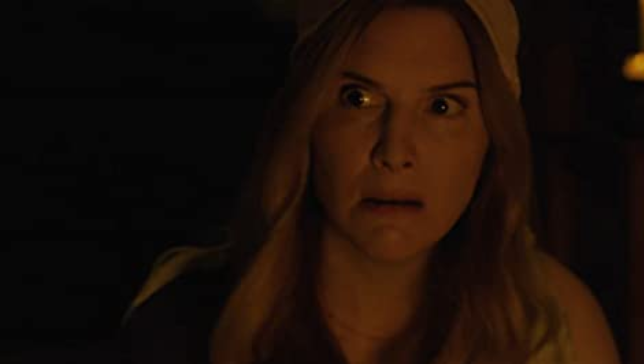 Can a cameo convert a relatively pedestrian film into something truly special? In the case of Pamela Moriarty’s A Deadly Legend, the answer is a resounding yes, with a simple, two-word explanation: Lori Petty. While everything around her plays out in a thoroughly serviceable way about this real estate dream gone bad thanks to the “deadly legend” of the title, that all fades far, far into the background when Petty – albeit briefly – is on camera. I have, quite simply, never seen anything like it.

Shot in the Hudson Valley, the film follows the recently widowed Joan Huntar (Kristen Anne Ferraro) who intuitively purchases an abandoned summer camp to develop into a more real estate, boosting her own career and, she believes, the fortunes of the local community. But as she, her family and friends soon discover, the area has a dark secret, built as it is on a mystical site with a history of gruesome pagan rites and rituals. When the spirits of yore are unleashed by the overzealous earth moving equipment of Joan’s crew, all hell, as they say, breaks loose.

Although A Deadly Legend is technically Moriarty’s feature debut, she has an impressive background as an assistant director on documentaries, features and shorts. Undeniably she knows her way around a set; what is relatively standard genre fare is directed with a firm hand by a filmmaker who clearly is confident in the role. There’s a curious tension between content and tone that isn’t perhaps as successful as it could be. While there’s a lot of adult material, certainly (incest, police brutality, racism), the film – especially with its action sequences – feels closer to kid’s television in its spirit rather than a horror movie per se. It’s corny, absolutely, but there is a kind of pleasure to that which perhaps sits beyond how successful the film is as a genre film as such.

But then, of course, is Lori Petty. Her screen time is brief, but it is a gift. She’s not the only familiar face to make a cameo in A Deadly Legend – Corbin Bernsen and Judd Hirsch also appear – but it is Petty who simply steals the show. While best known for her roles in Orange is the New Black and A League of their Own, Petty is 100% channeling the spirit of her greatest (and most underrated) performance here as Tank Girl in Rachel Talalay’s 1995 comic book adaptation of the same name. While Petty is a superb director in her own right (her autobiographical feature The Poker House from 2008 with Jennifer Lawrence has to be seen to be believed), her character Wanda in A Deadly Legend brings forth the punkier, wilder spirit of Petty’s on screen persona, not just from Tank Girl but also from her standout performance in the short lived television series Booker.

As Wanda, Petty brings A Deadly Legend to life; the wacky fifty-something drunk punk feels like she was beamed down from a spaceship into this film, and while everything happening around her is fairly standard low-budget genre territory, she is extraordinary. Some films are great, some achieve greatness, and some have greatness thrust upon them; A Deadly Legend is definitely the latter, and that greatness explicitly comes in the shape of Lori Petty’s brief but divine cameo.