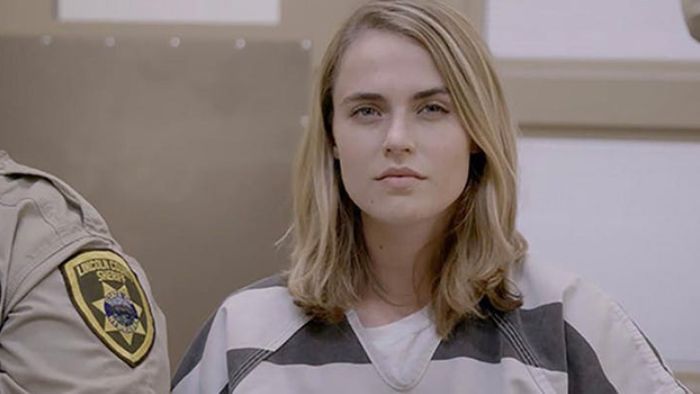 There’s nothing inherently funny about Frances Ferguson’s central concept: an affair between a teacher and a high-school student that scandalizes a small Nebraska town. But, as told from the eponymous educator’s (Kaley Wheless) perspective, there is something intriguing about Bob Byington’s latest darkly comic film — which uses its premise to chart a self-sabotaging quest of considerable proportions. The unhappy Fran knows that her choices will have consequences. She’s well aware that pursuing 17-year-old Jake (Jake French), a move she lands upon on a whim after substitute-teaching his biology class, will implode her listless marriage to Nick (Keith Poulson), cause her to lose a job that actually costs her money (with childcare fees exceeding her earnings) and see her freedom taken away. And she doesn’t seem that enthused about what she has chosen to do; however she tumbles forward, and this droll feature watches on.

Constantly sarcastic, cognizant that she’s considered attractive and woefully miserable, Fran is a picture of quarter-life malaise when the movie starts — and, tellingly, as it continues. She thought that getting married would be result in instant wedded bliss, but now Nick masturbates in his car before coming home from work, and she’s driven to hurl coral-hued coffee mugs at his head as soon as he walks in the door. Accordingly, she thinks that blowing everything up by making a bad decision will be an improvement, although that’s assuming she has given it much deliberation at all. Indeed, Fran takes every step and development in her narrative with the same dry detachment as the film itself sports. When she’s caught, incarcerated, divorced and eventually released, she barely betrays any emotion.

Wheless, who also earns a story credit alongside Byington, is fantastic as Fran. Her nonchalant stares are filled with soul-deep lethargy and apathy, and prove as exacting as capturing the feeling of not knowing what to do with your discontented life, so choosing to spiral downwards to ruin, can be on-screen. Narrating the protagonist’s story, Nick Offerman’s deadpan descriptions and commentary match the tone perfectly, as is to be expected of a Byington film. From Somebody Up There Likes Me and 7 Chinese Brothers to Infinity Baby, the writer/director’s features favour a wry mood, which always echoes through Offerman’s voice here.

As based on a newspaper article about a predatory teacher, there’s no avoiding the discomfort underscoring Frances Ferguson’s narrative, though, or its wavering effectiveness at making a statement. There’s scathing savagery in the idea that the standard vision of a happy existence for a woman can be so despairing that Fran views her choices and their outcome as preferable. There’s just as pointed and caustic a sentiment in the fact that, to explore topics as well-documented in film and television as being a melancholic twenty-something and/or a discontent suburban wife and mother, charting this path is one of the only ways left to stand out from the crowd. And, there’s much to unpack in the truth that women involved in this type of scenario receive a different and vastly unhealthy kind of attention from society at large. But, as Frances Ferguson avoids judging its lead, her actions and her nihilistic trajectory, it’s impossible to shake the knowledge that this movie couldn’t play the same way if the genders were reversed.

Byington’s stylistic flourishes suit the film well, with his features often mannered rather than naturalistic, as is firmly the case here. His comedy isn’t to everyone’s taste when he’s not satirising teacher-student sex scandals, which ensures that Frances Ferguson epitomises the filmmaker’s work at its most insular. It’s also purposefully disquieting. It knows that all of the aforementioned issues exist and, like its central figure, it hurtles onwards in its dissection of despondency and extreme acts of escapism — proving compelling thanks to Wheless’ performance and Offerman’s narration, yet with its subject matter always in view.