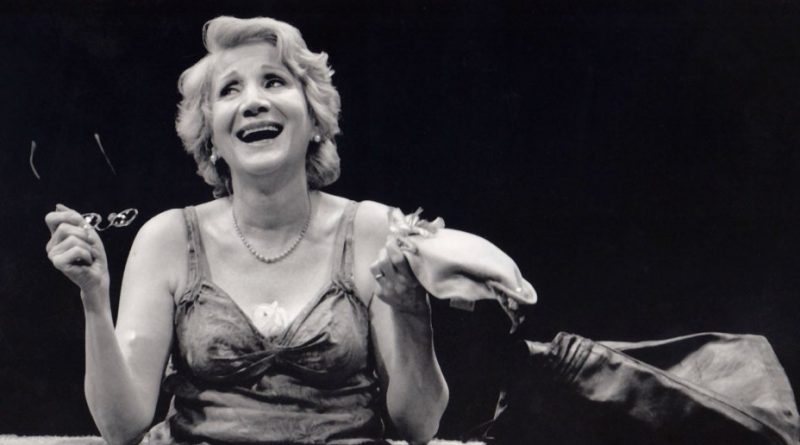 Olympia, the new documentary from filmmaker Harry Mavromichalis, is a sentimental look at a life well-lived and still going.

It will remind you of how fortunate we are to have Academy Award-winning actor Olympia Dukakis still here with us, working as hard as ever in her accomplished and entertaining career.

This bittersweet glimpse of her remarkable life allows Dukakis the freedom to flex the very muscles that catapulted her to fame. With no compunction, she openly discusses her obstacles, triumphs and regrets, and dishes about her collective career and personal experiences.

The documentary is dedicated to the memory of her late husband Louis Zorich, also an accomplished actor and the great love of her life, though he was flawed and at times a vexing partner.

The biodoc is directed and produced by Harry Mavromichalis, a NYU Film School graduate who crossed paths with Dukakis when she was teaching at Tisch School of the Arts.

Make no mistake, Dukakis is a force of nature. and in Mavromichalis’ adept hands she comes across as a dame you wish you knew personally. His hand at telling her story netted a surprisingly poignant reveal of an uncompromising spirit who defied traditional mores and bucked the status quo.

Tough, unwavering in her ideas and fiercely true to herself, she built her career on the solid foundation of her tireless theater work and training, which netted her a life-changing opportunity. It was thanks to Norman Jewison catching Dukakis’ work at a NYC theater performance that eventually lead to her earning her Academy Award. He knew immediately who to cast as the pivotal role of Cher’s wronged mother in the 1987 knockout comedy film Moonstruck. Her filmed reunion with Mr. Jewison was worth the price of admission in this touching documentary.

The narrative also presents Dukakis as many others see her too, as an intelligent, surgically precise straight-shooter with a line, be it scripted or not. She refused to bow to her restrictive old-world mother or to the binary gender norms of her 1950’s youth.

Olympia defied, studied, and pursued her truth and her art with a heavy veil of humor, heart with an unabashed lust for life.

It’s a bit of Truth or Dare in style as we ride shotgun with Olympia in natural behind the scenes shots and editing technique, all designed perhaps to expose her ad-lib talents, unpretentious nature and disarming wit. At its core, Olympia tells a poignant story of transformation. It is a constant in life, until the final act.

She bravely discusses such matters and opens her life up revealing her weaknesses and mistakes, beginning as a scrappy street kid fending off pugnacious Irish youths in the neighborhood, so common in the balkanized ethnic Caucasian suburbs of Boston and beyond during the mid-20th Century. Dukakis was a defiant and mouthy child, and later as a student she took up competitive fencing in a solidly Brahmin WASP environment and flourished. Luckily for us, she eventually discovered acting.

After years of working in New York, she escaped the relentless type casting that she faced in auditions thanks to her last name, and headed to Montclair, New Jersey to create her own theater company. Armed with like-minded actors, she broke ground in the Garden State and became the talk of the Big Apple for the sheer quality of performances and work being turned in under their Broadway-primed noses.

The documentary percolates with inspired interviews, and is cut up by filmed moments of her interacting with starstruck fans and sneaking forbidden cigarettes. The action is interspersed with snipets of her notable performances, enlightening and amusing off-the-cuff anecdotes and revealing admissions and painful reflections. Dukakis is presented as a devoted friend, a lover, and a mother. She is honest in her own assessments of all these traits. A strong bout of depression, drug use, and feelings of wanting to end it all are analytical confessions woven into this retrospective of a life still being lived.

This film is a lesson in how to override the ingrained sexual biases, stereotypes of ethnicity, and other irksome blocks that Olympia bulldozed with irrepressible vitality that has never diminished.

Dukakis slyly pokes a stick at the ageism in Hollywood while giving props to her pals like Ed Asner, who saluted her during her Hollywood Walk of Fame ceremony.

Another scene of note was Dukakis showing off her female figurines, representing the three stages of womanhood depicted: Virgin, mother, and crone, noting she was in the latter phase now in her life reaching the milestone 80 years-of age mark. Dukakis may have attained fame later in life than most actors, but in a cocktail and laughter-driven conversation with Tales of the City author Armistead Maupin, she described herself as a “motherfucking octogenarian.”

Her work ethic, and many gifts and admirable traits are lauded by peers Diane Ladd, Laura Linney, Lanie Kazan, Rocco Sisto, Whoopi Goldberg, Austin Pendleton, and Lynn Cohen, as well as her late husband, actor Louis Zorich. The history of their enviable partnership and creative collaboration exemplifies what a great marriage can be with good luck and wise choices.

Sadly, Louis died in 2018. And when asked about her regrets, she speaks about her own parenting skills. Sons Peter and Stefan Zorich each recall how different their parents were in comparison to other children. It was during her pregnancy with daughter Christina that we learn that her husband was unfaithful to her, which elicited a patented Dukakis-delivered ultimatum that worked, returning her errant but deeply emotional husband back to the family.

On a quest to the old country, Dukakis treds the turf where her family had lived before emigrating to America, a profound exchange happens for Dukakis. She happens upon a Greek chorus of four contented yayas (grandmothers) who knew her forebears. In conversation, Calliope, one of the four, says to her “the years pass fast.” This exchange has Dukakis in tears. If it doesn’t do the same to you, you just weren’t paying attention.