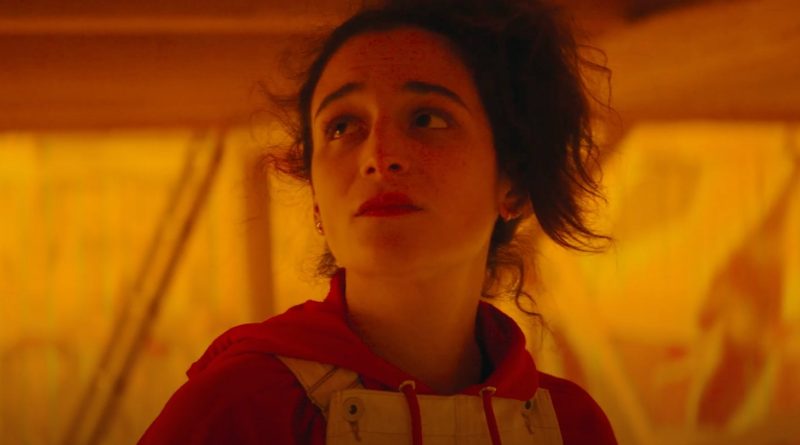 Jenny Slate plays a struggling artist trying to find herself in a remote corner of Norway in The Sunlit Night, a slight romantic comedy saturated in whimsy. And not in a good way.

Slate is Frances, an artist whose personal and professional lives are unraveling. Her paintings are savaged by critics, her boyfriend dumps her and she goes home to her parents’ cramped Manhattan apartment in defeat. Turns out mom and dad have decided to separate. Desperate to escape the claustrophobia of her own life, Frances agrees to travel to Lofoten, in the far north of Norway, to assist on a project with a well-known and much disliked painter.

And so we move from the city to Arctic landscapes and a tiny settlement where the Viking museum and a recreated Viking village are top tourist attractions. Frances meets the curmudgeonly Nils (Fridtjov Saheim) and begins her 12 hour work days, painting an old barn various shades of yellow. Nils hopes the project will put him on the map — literally. His ambition is to get the yellow barn approved as a tourist stop and properly noted on travel maps of the area.

The nearby tourist centre brings Zach Galifianakis into the story as an American working as head Viking; romance is introduced when Frances meets a young baker named Yasha (Alex Sharp) who has turned up in Lofoten to get an authentic Viking burial for his late father. Huh?

By the time Gillian Anderson appears with an over-the-top Russian accent, you may find yourself losing patience. This much quirky carry-on, caprice, eccentricity and pixilated embroidery is exhausting; a script would have been a better idea.

As the story winds up, a viewer is asked to buy a plot turn that makes absolutely no sense in light of everything else we know about Frances.

Never mind. Before it falls apart, The Sunlit Night has its moments — all of them courtesy Jenny Slate. She actually gets close to saving this thing through sheer force of talent. What a pity Slate is so often lumbered with the quirk element in storytelling, but perhaps that’s to be expected in an industry that views ‘intellect’ and ‘oddball’ as synonymous.

Director David Wnendt seems to have organized all the right bits and pieces but something happened in the process of putting them all together. Rebecca Dinerstein wrote the screenplay here from her own novel. If you had to guess, you might think she had difficulty knowing what to leave out.
Certainly, much was gained in casting Slate. Anyway, winsome/lose some.