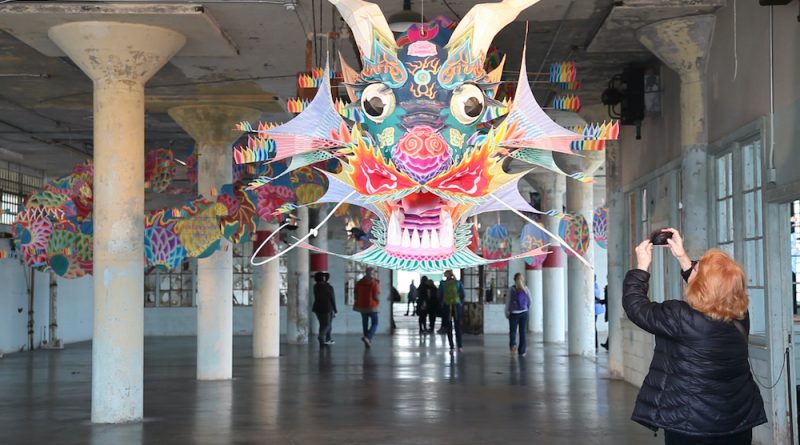 As the old slogan goes, the personal is political.

But the political can also be personal, which the documentary Ai Weiwei: Yours Truly truly demonstrates.

This portrait of the artist and activist centers on Ai’s @Large, an expansive exhibition — at San Francisco’s notorious Alcatraz Island — that attracted more than 900,000 people during its 2014-15 run.

Unfortunately, the artist himself wasn’t one of them. At the time, the Chinese government had taken away his passport. (Which has since been returned.)

So curator Cheryl Hines, founder of the sponsoring FOR-SITE Foundation (who’s credited as the documentary’s director-producer) went to China to work with Ai on an exhibit devoted to the price paid by freedom fighters around the world: the loss of their own freedom.

Yours Truly explores the creative process, as Ai conceives expansive pieces — and Hines shares layouts of the former federal penitentiary that will serve as a gallery, and echo chamber, for the artworks.

Beyond his own incarceration, Ai learned this lesson as a boy, in the 1950s, when his family — headed by his father, a dissident poet — was sent to the Gobi Desert. The artist likens it to the Soviet Union’s traditional detention destination, Siberia.

During that time, Ai’s father received a postcard, reminding him he wasn’t forgotten — a process the artist revives in the @Large exhibit.

After viewing “Trace” — 176 pixellated, postage stamp-style Lego portraits of prisoners and exiles from around the world — exhibit visitors moved on to “Yours Truly,” where they could write postcards to 116 featured prisoners of conscience. (More than 92,000 of them did.)

The messages themselves prove heart-wrenchingly poignant. (“I hope you can fly away soon and get a pair of wings,” one little girl writes to a prisoner in Saudi Arabia, illustrating her postcard with a self-portrait and multiple hearts.)

But that’s nothing compared to the interviews with prisoners, and their families, reacting to the receipt of the postcards. Among them: a leader of Egypt’s 2011 Arab Spring uprising and the CIA analyst who went to jail for blowing the whistle on waterboarding.

“Not all inmates in prison have committed crimes,” Ai observes. “Many people are in prison because they want to change society. I have an obligation to speak on their behalf.”

And, as Ai Weiwei: Yours Truly proves, his pictures speak far louder than words.