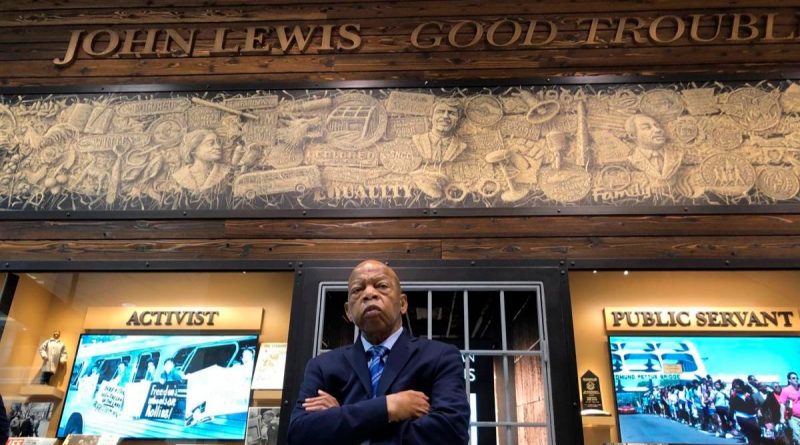 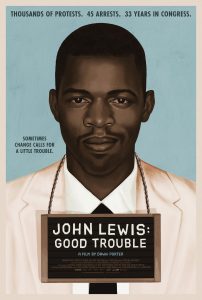 John Lewis grew up in Alabama, the son of sharecroppers. He attended seminary and university in Nashville, and eventually became deeply involved in the civil rights movement of the 1960s, organizing and leading protests alongside Martin Luther King Jr. and other prominent leaders. A lifelong believer in nonviolent protest, Lewis helped organize sit-ins and boycotts and was one of the original Freedom Riders. He served as chair of the Student Nonviolent Coordinating Committee, was director of the Voter Education Project, and was elected to the U.S. House of Representatives in 1986, where he serves to this day.

Porter uses archival news footage, personal documents (a photo from Lewis’ 1968 wedding to Lillian Miles is breathtaking), and interviews with Lewis’ family members, colleagues, and others to paint a portrait of a man who has dedicated his life to furthering the cause of equality. Everyone from Senator Cory Booker to both Hillary and Bill Clinton to Lewis’ affectionate sisters weighs in with words of praise about the inspiration that Lewis has been to them — and to so many Americans.

No human being is perfect, but some of them are close enough to deserve lionization, and Lewis falls squarely into that esteemed group of exemplary humans. Porter bring us into his daily life, shares moments both poignant and funny (his dance to Happy is charmingly goofy), and captures his unfailingly optimistic belief that, as his friend Dr. King said, “The arc of the moral universe is long, but it bends toward justice.” If John Lewis can stay hopeful in the face of everything happening in the world today, then the rest of us can, too. — Betsy Bozdech

Nell Minow: Good Trouble is a welcome response to the easy cynicism reflected around us. John Lewis inspires us not just because of the imperishable integrity that shines through his spirit but because of the warm humanity we see in ever interaction, but for the endless stream of people coming up to thank him or just to be near him to the infinite patience that keeps him going even after so much he thought he had helped to settle under attack. This documentary has some welcome insights from friends, colleagues, and family, but as it should be the heart of the movie is Lewis himself.

Kathia Woods John Lewis is an icon. We mainly associated him with his involvement in the Civil Rights Movement and his career as a Congressman. It was refreshing to see a film about the Congressman’s life that gave us insight into his early beginnings. Many will think that this film does not delve deeply enough into his relationship with rival/friend Julian Bond. The film’s highlights are his interactions with the younger members of the congressional staff in Atlanta and his close relationship with Michael Collins, his chief of staff. Good Trouble will introduce a younger generation to this incredible man while reminding us that we are all capable of change if we are willing to sacrifice.

Leslie Combemale Director/producer Dawn Porter spent over a year with Georgia Congressman John Lewis, experiencing his life and learning what makes ‘Good Trouble’, and her answer is a fascinating, compelling portrait of a man who has walked with fearlessness and integrity for his whole life. The film is inspirational and timely, because Lewis is someone who has been actively inclusive in all his work, making us as citizens ask ourselves what we are doing, in fearlessness, to make lasting change for those around us? Clearly a talented interviewer and storyteller, Porter brings us a film that reminds us we are all in this together, and we can make a difference. Read interview with Dawn Porter.

Susan Wloszczyna: Dawn Porter’s documentary John Lewis: Good Trouble is a stirring tribute to the 80-year-old civil rights hero and Georgia Democratic U.S. representative who eschewed violence while putting his own life on the line during protests in the early ‘60s. The documentary is also a clarion call to warn us that our election this fall, even before coronavirus came into our lives, is in danger of being compromised. Read full review.

Jennifer Merin In John Lewis: Good Trouble, filmmaker Dawn Porter chronicles the life and career of John Lewis, the U.S. Representative for Georgia’s 5th congressional district, who is serving in his 17th term in the House, having served since 1987. With a well-balanced mix of archival footage and on camera interviews, the well researched film pays tribute to one of America’s preeminent civil rights leaders. There’s a lot you need to know about John Lewis and his ‘good trouble’ advocacy, and this fine documentary delivers in full. John Lewis: Good Trouble is a truly inspiring film, released timely for consideration during these troubled times. Following John Lewis’s lead, it’s time to make ‘good trouble’ part of our daily routine.

MaryAnn Johanson Dawn Porter’s terrific portrait of the legendary Congressman is also an ironic one: Much of the progress that Lewis literally put his life on the line for half a century ago is threatened, and he’s having to fight some of the same battles again. No one ever said that bending the arc of history toward justice would be easy, but this seems a bit much to ask of Lewis. Fortunately for us all, as Porter’s compassionate and often surprisingly humorous portrait shows, Lewis is still up for a fight. We’re beyond lucky to have him. Read full review.

Loren King One couldn’t pick a more appropriate film for this moment in history than John Lewis: Good Trouble. The 80 year-old civil rights leader and US Congressman’s life has spanned the Jim Crow south to the halls of power. Dawn Porter’s documentary doesn’t do anything fancy and it doesn’t need to; Lewis’s personal story and the historical footage speak volumes. Read full review.

Pam Grady: Dawn Porter, whose work includes the abortion documentary Trapped and the docu-series Bobby Kennedy for President, turns her incisive gaze to the life of the longtime Georgia congressman and civil rights legend. The film is both a celebration of all he has achieved and a straight biography than limns a legend’s life from his beginnings as the son of an Alabama sharecropper to his experiences as a Freedom Rider, speaker at the 1963 March on Washington, and victim of police brutality at the 1965 Selma march to his years of government service. The late Maryland Rep. Elijah Cummings and New York Congresswoman Alexandria Ocasio-Cortez are among those offer their observations of a singular career, but the strongest voice of all is that of Lewis himself, a man of warmth and surprising humor and gifted with a prodigious memory. His son John-Miles good-naturedly complains about how long it can take to traverse an airport with his father, as the congressman pauses to talk to the many admirers who approach him. Just why Lewis has so many people throwing themselves into his path is made abundantly clear in this irresistible and insightful documentary.

Sandie Angulo Chen: John Lewis: Good Trouble, director Dawn Porter’s inspiring documentary about legendary civil rights activist and congressman John Lewis should be a must-see for all Americans. Even though the majority of the movie covers his years as a young SNCC leader fighting Jim Crow segregation in the South, the film manages to feel as immediate as ever. The theme of Lewis being arrested and jailed time and time again as a protest for equal rights is a reminder that some laws are unjust and immoral, and that even today activists and demonstrators can be change-agents for the good of humanity. The director interviews Lewis and his inner circle of family and friends, as well as famous politicians like Bill and Hillary Clinton, Elijah Cummings, Cory Booker, Alexandria Ocasio-Cortez, and more. The film is also a frightening reminder that the congressman is now battling an aggressive cancer diagnosis, and we must learn everything from and about him before it’s too late. Lewis’ life has been powerful and life-changing, and the documentary captures his spirit of advocacy, conviction, and transformation.

Cate Marquis John Lewis: Good Trouble is an inspiring documentary about the long-serving Congressman John Lewis, a Civil Rights icon. Lewis calls standing up for what is right making “good trouble” something he has done most of his life. This admirable documentary reminds us about Lewis’ courage and storied role in the Civil Rights movement, from his days as a young man with Martin Luther King and marching in Selma, as well as painting a personal portrait of the venerable congressman carrying on the struggle today, in the face of voter suppression and other efforts to erode rights. Lewis projects a dignity and strength, but also a human warmth with the constituents and other people he meets. At the same time, this fine documentary spotlights his unbending truth-telling in dealing with opposing members of Congress as he continues his stalwart work for Civil Rights.