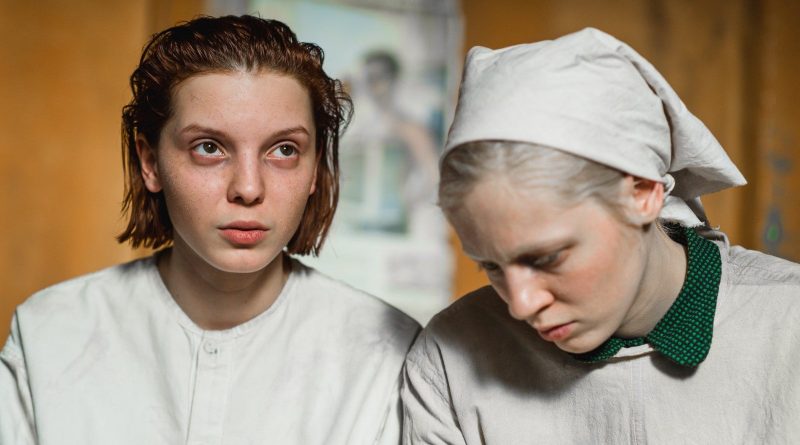 There are those films that I admire more than I enjoy, and that is the case with Russian director Kantemir Balagov’s Beanpole. A powerful, offbeat depiction of post-World War II trauma in 1945 Leningrad, the story focuses on the title character Iya, called Beanpole, and her friend Masha, a decorated war hero, both now serving as nurses in a military hospital.

Based on Nobel Prize winner Svetlana Alexievich’s (1985) The Unwomanly Face of War, the film follows these two nurses, anti-aircraft gunners who fought together. Sent home from the front during the war, Iya was declared an invalid with post-concussion syndrome, which exhibits itself as Iya suddenly freezing, paralyzed in place for minutes.

Traumatic wartime experiences haunt Iya’s and Masha’s struggles to move into a post-war existence, an all but impossible adjustment since they work with PTSD soldiers. The pace at their workplace rewards, but certainly demands, patience with the events that unfold. No spoilers for the many surprises, so suffice it to say that they include initiated and unwanted sex, infertility, camaraderie, intimidation, disorientation, and compassion: all focused on human relationships and the battle to reconnect.

For last year’s Telluride Film Festival, where I first saw the film, and in later interviews, co-writer/director Balagov made clear that, most people consider Iya’s height the reason for the title Beanpole. However, he adds that, in fact, the title suggests clumsiness, that each character is a beanpole, and that, in effect, trying to start a normal life after the war is physically and morally clumsy. Reinforcing this, the strange sound as the film opens indicates the strain of trying to get back to zero, to start again.

Cinematographer Kseniya Sereda reinforces this symbolism with dominant, vibrant colors: green the color of hope moving past stagnation, red the color of trauma, especially for Masha and her six-year old Pashka. Director of Photography Sereda and director Balagov modeled their compositions, including lighting and art direction, after Dutch paintings, especially those by Vermeer.

A tough, accomplished film, winner of awards at the Cannes Film Festival, shortlisted for the Best International Film Oscar, and recipient of considerable critical praise, Beanpole, in Russian with English subtitles, is available at the Kino Lorber website or KinoNow.