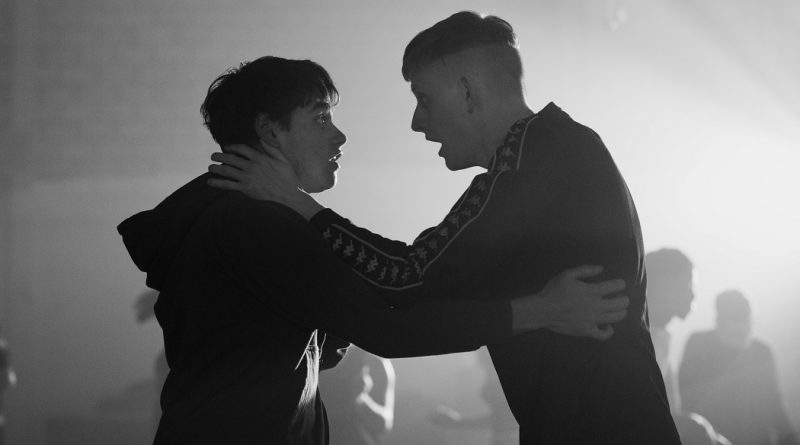 The power of friendship and music forcefully shines through the gritty coming-of-age story Beats.

Alison and Robert are preparing to move Johnno and his younger brother to a nice prefab neighborhood in the suburbs, where he will be further away from Spanner, whom they consider a bad influence more based on his brother’s reputation than his own.

But Spanner and Johnno are best mates not only because of their shared history but also due to their common passion for the pulsating electricity of rave music.

Unfortunately, the Criminal Justice & Public Order Bill seeks to specifically outlaw unlicensed gatherings “at which amplified music is played … wholly or predominantly characterized by he emission of a succession of repetitive beats.”

With their separation imminent, the 15-year-olds plot to attend their first rave together as their last hurrah. With the help of Spanner’s older cousin Wendy (Rachel Jackson), the teens track down a literate, pill-popping underground DJ named D-Man (Ross Mann), who is planning a huge rave outside Glasgow as a kind of musical protest against the new law.

Catching a ride with D-Man, Wendy and her friends Cat (Amy Manson) and Laura (Gemma McElhinney) – Johnno quickly takes a fancy to the latter, despite her romantic entanglement with one of Fido’s mean-spirited flunkies – the boys take an eventful ride into the countryside to experience one big night of full-on musical (and drug-induced) ecstasy.

Director Brian Welsh lensed Beats in black and white – in the proud ’90s indie film tradition – with well-played splashes of color reserved for red buttons on boom boxes and kaleidoscopic psychedelic rave experiences. Co-written by Welsh and Kieran Hurley based on the latter’s play, Beats features an dynamically authentic soundtrack compiled by Optimo’s JD Twitch and featuring music by the likes of The Prodigy, Orbital and N-Joi.

Despite the movie’s period accuracy, moments still will feel timely given the recent protests over police brutality.

Thanks to the spot-on performances by Ortega and Macdonald, what the film gets right more than anything is its depiction of the fierce, soul-deep bonds of youthful friendship, the kind of us-against-them ties that provide teens with a lifeline through the storms of adolescence but inevitably fray once we reach the shoals of adulthood.