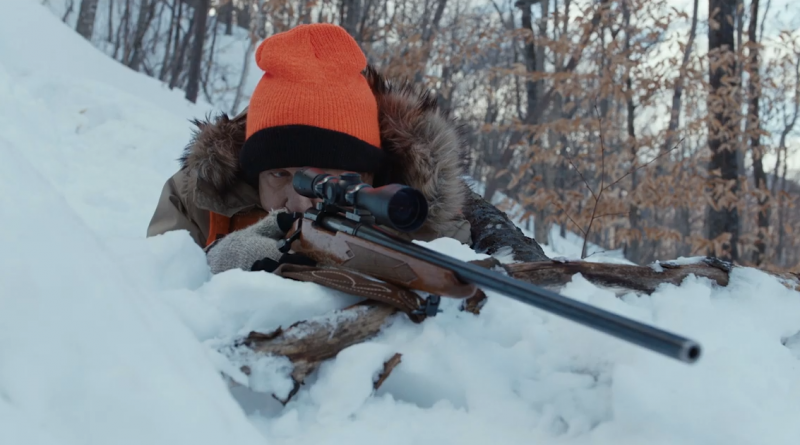 This low-budget ‘survival’ thriller, set in the wintry wilderness of Northern Maine, stars Tom Berenger as an aging, alcoholic hunter who bags more than just a deer.

Chain-smoking Vietnam War veteran Jim Reed (Berenger) lives in his “custom” RV, coughing up blood and washing down his meds with milk. He’s a loner with a murky past that involves estrangement from his son and the death of his daughter.

One day, while hunting a buck in the forest, Jim accidentally shoots a young woman who – he later discovers – is part of a gang that recently robbed a casino of $1.2 million.

When he realizes he dropped a cigarette butt in the snow and could be arrested for involuntary manslaughter, Jim returns to the scene of the crime, where he discovers a duffel bag filled with cash.

Impulsively, he grabs it and heads back to his RV, only to discover he’s being followed by the other four robbers who are determined to retrieve their stolen loot.

Struggling to make his way through the deep snow, Jim discovers a nearby cave, where he stashes the duffel bag. After that, it’s a cat-and-mouse game with the much-younger thieves in reckless pursuit.

Meanwhile at the local diner, Jim has befriended Debbie (Kristen Hager), a distraught waitress, who is trying to summon the courage to leave her abusive husband, George (Jimmy LeBlanc).

Originally titled Allagash and filmed around Oxford, Maine, it’s written and directed by John Barr, who also serves as cinematographer. Unfortunately, the characters, particularly the villains, need more fleshing out, and Barr never makes the most of his action set-ups.

Yet there is one particularly inventive scene in which Jim, having fallen in the creek, seeks refuge in the icy cave, defrosting his frozen fingers and soaked shirt over a fire made with stacks of filched currency. Burning money is, indeed, a memorable sight.

On the Granger Movie Gauge of 1 to 10, Blood and Money is a frigid 5, chronicling the familiar futility of B-movie crime