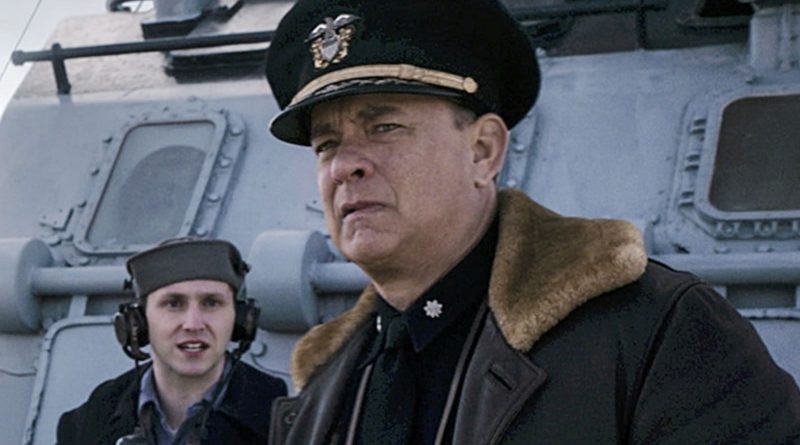 A brief prologue reveals Krause exchanging Christmas gifts with his adored Evie (Elisabeth Shue) in a San Francisco hotel lobby. When she turns down his marriage proposal, he vows to wait for her for as long as it takes.

Then it’s off to war on the high seas, as Krause’s destroyer is doggedly pursued by German U-Boats (submarines), launching deadly torpedoes.

Since American planes could guard the convoy only up to a certain point in the Atlantic, they’re completely unprotected for a treacherous five-day stretch – known as the “black pit” – before British planes can offer air cover on the other end.

The “Battle of the Atlantic” was a continuous campaign from 1939-1945, chronicling the movement of troops and supplies across the Atlantic Ocean; 3,500 cargo ships were sunk and 72,200 “souls” died.

Based on C.S. Forester’s The good Shepherd (1955), it’s adapted by Tom Hanks and tautly directed by Aaron Schneider, who opts for narrative realism over emotional involvement.

During Greyhound’s aggressive and defensive maneuvers, there’s lots of detailed naval jargon. For example, “Huff-Duff” refers to high-frequency direction-finding, which is how the Allies used radio traffic to track German U-Boats in order to attack them.

The Germans periodically broadcast taunting messages, like: “Did you think you’d slipped away from this gray wolf? You and your comrades will die today.”

On the Granger Movie Gauge of 1 to 10, Greyhound is a seriously stressful 6, profiling stoic resilience under pressure.