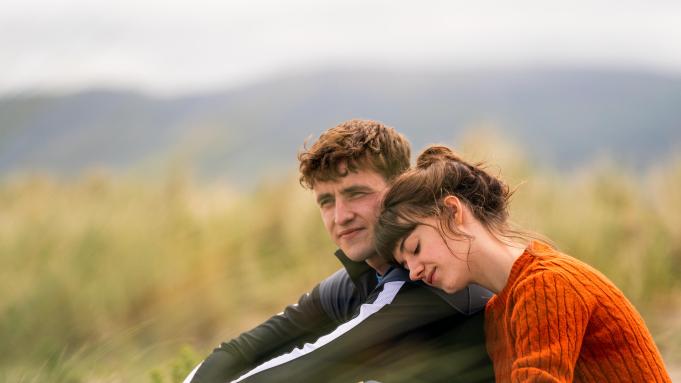 Sally Rooney’s impressive novel, Normal People, makes an even more impressive transition to film (streaming on Hulu via BBC). Rooney created the characters of Connell and Marianne, teens in a small town in Ireland. Through the acting of Daisy Edgar-Jones and Paul Mescal on film, the two characters magnetize and engage and instruct.

Marianne stares out the classroom window. When her instructor suggests that she is not learning by staring, she responds, “I’m not learning anything from you anyway.” She is smart and she is clever, but she is very alone. She is ignored by all her classmates — except for Connell.

He can barely keep his eyes off her. His loving mother (Sarah Greene, Rosie) cleans house for Marianne’s very rich, very horrible parents, so Connell occasionally sees Marianne when he picks up his mother from work.

Their nodding acquaintance quickly moves to sexual intercourse, shown lovingly and vividly on the screen, a rare recording of hungry intimacy. As the two slowly mature, their relationship moves more toward a long, enduring, endearing friendship. Marianne, like many girls, blossoms at college, finding friends, expanding her brilliant mind, modifying her voice and exposing her self — sexual and social. Edgar-Jones credibly personifies the role of the emerging woman.

Connell, like many boys, barely finds his voice. Unlike so many male characters in the movies, he does not know what to say. He mumbles. He does not speak when he should have. He makes mistakes — in bed, at table, in class. He is so human that it’s painful to watch. What is not painful is watching how he looks at Marianne, happily and longingly and confusedly. Mescal gives Connell all his most human traits as a male.

Writing credits for the 12 episodes are shared by Rooney herself with Alice Birch and Mark O’Rowe. Directing is halved between Lenny Abrahamson and Hettie Macdonald. Editing (especially of the love-making scenes), lighting, and costuming are exemplary, but it’s those two characters who pull evermore. Normal People is an experience as much as a television series. It is not to be missed.