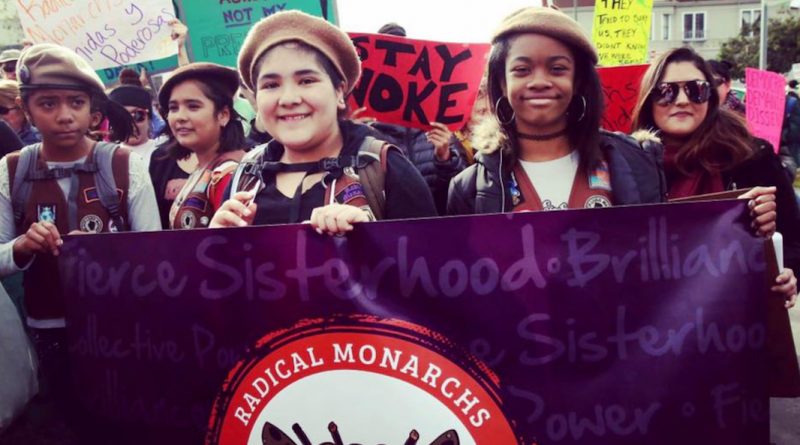 The first thing that strikes you, and stays with you far after the end of director Linda Goldstein Knowlton’s documentary We Are the Radical Monarchs, is the girls. There’s a 99% likelihood you will develop a fierce love for them. The film covers the Girls Scouts alternative empowering girls of color started in 2014, following founders Anayvette Martinez and Marilyn Hollinquest for three years, as they build their first troop of the Radical Monarchs.

Building self-confidence and pride, creating a safe place and a tight sisterhood, and fostering a sense of social justice and acceptance of all identities, perspectives, and experiences is what the Radical Monarchs is all about, and you see that in every scene of the film. You see that in every girl, and it’s inspiring. It’s also a reminder that anyone can make a difference, and right about now, every one of us needs to feel like we have the power for change.

Seeing the girls as they expand their understanding, and watching co-founders expand their reach by slowly adding more troops, will keep audience members not just fascinated but rooting for them all. This is especially true when we are shown the reaction of more conservative members of the media, who declare the whole enterprise as racist and bigoted. Through the criticism, the threats, to paraphrase Maya Angelou, ‘still, they rise’. Martinez and Hollinquest are potentially building the next Angelous, and Roxane Gays, and Ava DuVernays, and Dolores Huertas and AOCs. These girls share, onscreen, about their feelings of ‘otherness’ and isolation at being the only girl of color in their class, or their Girl Scout troop, or any number of other places, as well as their experiences with racism and being bullied. As a member of the Radical Monarchs, they have a place they can learn about themselves, question and, if need be, realign their understanding of their place in the world. Also, their rallying cry is taken from the Wonder Pets. What’s not to love about that?

Folks like Hannity called the group exclusionary, but the Radical Monarchs, as Martinez will tell you, is about inclusion, and allowing Black and Brown girls be the center. Really, the moment you have white girls in the group, you are replicating the dynamic inherent to nearly all situations in the US, which centers on whiteness first.

When the co-founders started the first troop, they had no idea it would become a nationwide phenomenon. They just used their own experience with activism and community organizing to shape an alternative for girls of color, where instead of learning how to sew or selling cookies, they learn about ethnic studies and get badges like Black Lives Matter, Radical Pride, Radical Bodies, and Radical Coding.

I smiled throughout the movie. One example is when a little girl named Amia, speaking of what she is learning about women’s history, corrects herself, saying, “or her-story, as we like to call it.” Another is when a group leader asks if they know who Donald Trump is. One Monarch raises her hand and says, “That guy is a hater.” The Radical Monarchs are making a bit of ‘her-story’ themselves, and in We Are the Radical Monarchs, it’s a joy watching them as they do it.

We Are the Radical Monarchs premieres at 9pm Monday, July 20th on PBS stations and will be streaming at https://www.pbs.org/video/we-are-the-radical-monarchs-amgqou/.