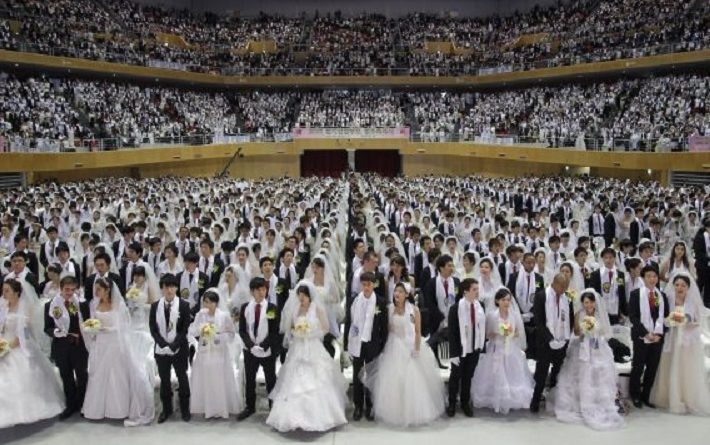 Cults are hot doc topic these days with a million series on Netflix and on the festival circuit. Something struck me as very different about Cara Jones’ Blessed Child almost immediately. While she left the Reverend Sun Myung Moon’s Unification Church (the “Moonies”) more than a decade ago, her family’s connection and her guilt remain an emotional hook she struggles to escape. Cara was born into the church, as her mother and father were already prominent members.  She was a devout church member. Her goal was to marry into the Moon family. Her passion for the church seemed to know no bounds. When she was 20 years old she was finally matched by Reverend Moon, but in a mass arena wedding, surrounded by hundreds of other matched couples, it was not everything she always dreamed it would be. Soon after she got a divorce.

Life was even more challenging for her younger brother Bow, who also serves as cinematographer. He was sent to Korea for the church’s conversion therapy, although they never call it that by name. He still questions being gay. Watching his anguish, much like Cara’s, is the most heartwrenching aspect of the film. We learn that at six months old, Cara was given to a church caretaker as her mother was asked to do missionary work. She essentially abandons her infant daughter for the church. This moment is revisited multiple times and I’m not sure if I felt like she got the closure she deserved. Perhaps it was too little, too late.

We have unprecedented access to the home movies the kids and Cara’s own father was constantly taking. Much like the vast majority of cult docs, Blessed Child also acknowledges that Reverend Moon and his wife, referred to as “Father” and “Mother,” are the same as any religious figureheads. Living lavish lifestyles, avoiding taxes, and being showered with love through their immense power. Essentially taking awkward virgin followers and telling that their pairing was for the Lord.

Cara and Bow interview former members and current members, including a small group of newly paired couples in Korea, even attending their mass wedding. The level of social and emotional skills between these individuals is not surprising. Hand holding is the limit prior to the actual wedding. How Cara gained access to the church’s ceremony after exiting the community is most surprising to me. For Cara, she was most astounded seeing her father appear on stage at that very event. She did not seem to understand just how entrenched her parents are in the church to this day.

The most engrossing sit-downs happen with her parents. Mom and Dad provided a picture-perfect childhood for Cara and her four brothers. They wanted for nothing, respected their parents, and except for the two-year hiatus from Mom, they were very present.

Here’s the thing about Blessed Child that makes it vastly different from other cult docs. Even though Cara broke with the Unification Church, she and her parents speak on a regular basis. Her need to please is tragic but completely understandable considering how deep she was in the organization. I admittedly wept at the end of the film when I found out how her life has since changed. Cara deserves to feel loved for who she truly is. From an outsider’s perspective, even with all the information we are given, videos past and present, firsthand accounts, Blessed Child actually makes me question whether the Moonies are a cult after all. This is from someone who was sent to Catholic school for eight years and broke with the church two years later, never to return. How are they any different from any other megachurch? Arranged marriage is still culturally prevalent throughout India. There is a feeling that because of the inherent guilt, Cara almost doesn’t go hard enough at the church. You will have to judge for yourself. This story is unique and absolutely deserves an audience. It is a captivating and extraordinarily personal documentary.