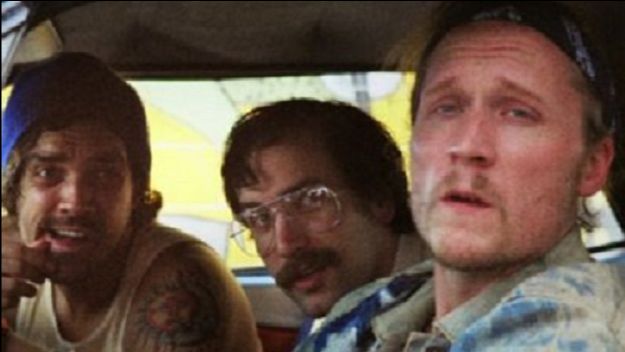 Stylistically you will feel all the feels of the aforementioned great films, as the look of this flick is wildly reminiscent. Director Will Addison and his DP Bruno Doria bust out the energetic whip pans and emulate the classic framing the greats like Stone, Tarantino and of course, Tommy Chong are famous for.

What we have here is a classic buddy heist situation as two dim criminals named Jack (Ben Matheny) and Scottie (Matthew Paul Martinez) are hustling bum fights when they suddenly discover that a potential windfall of “treasure” awaits in sunny, sandy San Clemente, California.

This hairball energetic farce features these two men and a dream of riches in the faraway place which to two ill-equipped southern boys in the 1970’s might as well be Bali Hai.

Do not run away yet, as there are merits to this off-beat and unlikely buddy tale. The drama comes with Linda Hamilton channeling the spirit of Dennis Hopper as a heavy named King George. And I mean that sincerely, she’s got that elusive Hopperesque swagger and menace perfectly balanced with timing and hilarious delivery of her lines, and she’s quite brilliant.

More than that. She’s great! Sporting a gold tooth and masochistic cornrows, this butch badass wants these two deadbeat nitwits to pay up, and we are kind of rooting for her all along their journey.

Their raison d’etre becomes getting their shit-heap of a car to California through the most inhospitable oven-like part of the USA, where rigs like theirs fall prey to the elements. Metal carcasses that are left as reminders to fools who attempt this cross-country drive to fly next time.

No spoilers other than the fact…did I mention Linda Hamilton plays a heavy in cornrows? Delightful.

Add to the “nice” list is actor Susan Gordon. Gordon plays Blue Eyes, daughter of King George and equally bonkers and in a gender bending, aggro female role I never expected. Blue is the Negan of this yarn. She and her trusty bat are the enforcers for George. This is the part when I tell you that I wished John Waters had penned the script.

Our erstwhile leads Jack and Scottie manage to also squeeze in a hostage Collin (Cory Dumesnil) who eventually gets that crazy Stockholm syndrome. Together the three work as a gang and perfect their grab and dash robberies. Now they have started to make news headlines as the Star-Spangled Bandits.

Their terrain is unrecommended yet traversed, and the encounters are a series of off-the-wall interactive moments.

Writer-director Will Addison undoubtedly has a great eye and sure knows how to point a camera and get a stylish shot. A huzzah for the costume designer Ellen Bull, and the production designer Katie Bulla too, as this film looks really well put together from an art department point of view.

But the beauty of any great buddy or heist films lies in the chemistry of the leads, and these two try hard…but Linda Hamilton cannot be wedged into every scene.

Bonus for cameo fans! John Goodman’s voice is featured in a voice-over too.

Truly, I have the taste of a 12-year-old boy when it comes to schtick like this and I wanted to love this Bonnie and Clyde [with extra chromosomes] stoner flick, but sadly, in Idaho, possession gets you a lifetime sentence.