As the lights dim in the cinema (and as I, as always, feel an anticipatory thrill), the first images that hit the screen have a monumental, challenging job. They must quickly and efficiently whisk us viewers from the thoughts and concerns of our multifaceted realities into a receptive embrace of the film. Title sequences must establish a mood, an atmosphere, and an authenticity for an alternative world in which we willingly and speedily immerse ourselves.

When title designers succeed, they offer a creative, artistic achievement of their own, making a significant contribution to the work they introduce. On a personal note, if I may, when I taught film production, I regularly showed Bass on Titles, a tribute to the ingenuity of Saul Bass who honed the fine art of title sequences to an extraordinary degree. With “visual consultant” and “pictorial consultant” credits of his own, an Oscar winner for his own short film Why Man Creates, Bass designed more than fifty stunning film title introductions, including The Man with the Golden Arm (1955), The Seven Year Itch (1955), Vertigo (1958), North by Northwest (1959), Psycho (1960), Goodfellas (1990), and Casino (1995.) I digress to cite these because cinema lovers, upon reflection, immediately recognize the contribution accomplished titles make, communicating and creating the worlds they inaugurate. All who share the expertise to present praiseworthy and magnificent opening sequences deserve much more acknowledgement than they usually receive, in part because we get transported right into the film and leave them behind, their work completed.

Enter Karin Fong, founder member of Imaginary Forces, creative director for the main title sequence for the second season of Tom Clancy’s Jack Ryan, available on Netflix. As Tom Clancy’s Jack Ryan: Inside the Title Sequence shows, the splashy introduction gives viewers more than a visual feast. It incorporates a profound knowledge of Ryan’s duality. Fong states, “The title has a lot of different layers because Jack Ryan is a complex personality. We combined photography, footage, 2d and 3d elements to make a composite portrait of the man.” In what she describes as “the portal into the show,” she endorses “metaphorical and symbolic ways of representing the character rather than taking it literally.”

In 80 seconds, the images intermix and contrast Ryan’s peaceful civilian life with his violent, traumatic military life. What we see are split screen representations of both realms: Ryan rowing in a sleek, racing shell split screen with a bullet which shoots off the end of the shell, moving left to right on screen. Similarly, the baseball Jack tosses back and forth in his office shares the screen with a hand grenade, expressing the dichotomy and the tension of the American pastime abutting American violence.

As Fong adds, stockbroker Jack and CIA Jack meet in a bird’s eye image of the Pentagon pattern that jumps to an image of a Parisian boulevard star pattern yielding the screen to bicycle spokes, Jack’s vehicle of choice for transportation to work. A few shots later, a ceiling fan shares space with helicopter blades, an association made famous in Apocalypse Now’s introductory scenes. It continues to powerfully conveys the domestic versus military tension in Jack’s life. Seconds later, a row of fighter planes yields in a near graphic match to the vertebra of Jack’s back, the reason he had to leave the military.

Another aside, if you will. When I taught and analyzed such imagery with its connotations and allusions, students invariably asked if I weren’t overthinking the shots. I always answered that, intentional or not, consciously or subconsciously, each detail suggests a myriad of complementary or contested ideas. Fong, as others I’d introduce into the classroom discussion, describes her ideas, proving that, in the kind of stunning work she has created for Jack Ryan and other of her title sequences, artists know and can clearly express exactly the ideas and connotations they hope to transmit. In fact, we may not give them adequate credit for the perceptive, analytical insights they express through the images they create.

The Jack Ryan Season 2 titles include even more impressive details, what Fong describes as an “updated digital data base” of glitches, some so rapid-fire they’re almost subliminal. For example, in the opening shots of Jack’s racing skull, the skull is overlaid by a graphic match of the right side up and then upside down Washington Monument. It occurs so quickly, it’s all but invisible. Similarly, but less instantaneous in its appearance, an explosion morphs to autumn foliage, the perpetrated violence this time yielding to natural beauty, again expressing more duality. I would even argue that it is exactly that dramatic conflict and its inherent tension that makes the title sequence as well as the series so exciting. 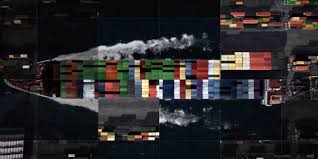 Creating these images with effective lighting, CG, and movement within and between frames, Fong says she “loves to live in that space between analog and digital.” She takes this multilayered consolidation one step further in what serves as the pièce de résistance of the title sequence. An overhead shot of a colorful container ship segues to the ribbons on Jack’s official, decorated Marine uniform, a shot combining four media. Finally, the titles cycle through a myriad of details in Ryan’s imagined dossier to end with the series name, Tom Clancy’s Jack Ryan. This whirlwind of associated morphing images totals a minute twenty seconds.

With her behind-the-scenes explanation, Fong has given us a gift, generously providing insight into her multidimensional, provocative short films, which is what her title sequences really are. With Jack Ryan and other title designs (for a Charles and Ray Eames exhibit, 102 Dalmatians, Little Fires Everywhere, See and others), she and her creative team accomplish even more than I urged my students to do. They not only take us effortlessly from our conventional world into that of a film or series. They present an exhilarating ride into another universe.