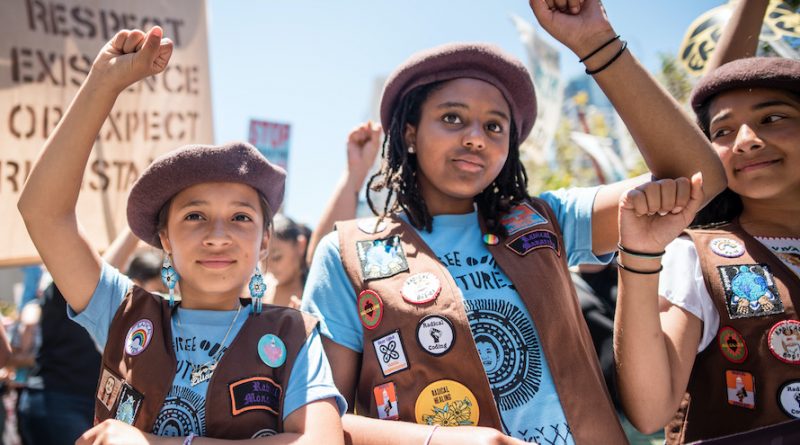 Director Linda Goldstein Knowlton may have started filming We Are the Radical Monarchs in 2015, but this compelling documentary about a scouting troop specifically and intentionally centered on girls of color couldn’t feel any more timely than it does in mid-2020, with social justice and the Black Lives Matter movement (finally) at the forefront of the public consciousness. (The only thing that feels NOT ripped from today’s headlines is the fact that no one’s wearing masks…) 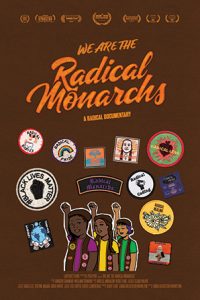 As Goldstein Knowlton told us when we interviewed her about the film, she was immediately and intensely drawn to the story of the Radical Monarchs when she first read an article about the troop’s founding in Oakland in 2014. She and her producing partner/editor, Katie Flint, documented the Monarchs over three years starting in early 2015, following along as leaders/founders Anayvette Martinez and Marilyn Hollinquest help their girls earn badges while learning about social justice and self empowerment. They also go camping and make s’mores — but no one ever mentions selling cookies.

The girls talk openly and honestly about pride and sexual identity, gender politics, stereotypes, police brutality, ableism, and more. They make signs and go to protests — including the inaugural Women’s March shortly after Donald Trump’s election. They visit lawmakers and advocate for meaningful change. They’re reminded how important it is to love both themselves and others. In short, they kick ass.

The troop faces challenges, of course: criticism from conservative journalists and pundits like Sean Hannity (“we think [the girls are] being exploited,” he says in a clip from Fox News), logistical issues related to budget and staffing, and personal difficulties like Anayvette’s job loss. But their drive to make change — to start a movement — keeps them going. And by the time the first group of Monarchs graduates at the end of the film, it’s clear they’re succeeding: These girls are ready to lead, and the world had better get ready for them. — Betsy Bozdech

MaryAnn Johanson What absolute heroes Anayvette Martinez and Marilyn Hollinquest are! Their creation of the Radical Monarchs is the epitome of ground-up activism: See a need, and fulfill it. Be the change you want to see in the world. Their incredibly hard work and dedication to helping girls of color navigate a world not geared to their needs is an inspiration the likes of which the world could use a lot more of. And the joy they bring to heavy social-justice matters is something we could all take a cue from, especially when taking on such causes can feel overwhelming and even hopeless. What an uplifting film all around.

Kathia Woods What is the saying ‘if you can’t find it create it?’ That’s exactly what Anayvette Martinez and Marilyn Hollinquest did in creating The Monarchs. Building their own organization in Oakland as an alternative to the traditional Girl Scouts. The beauty of this film is that it reaffirms the importance of Representation. We are The Radical Monarchs demonstrates that when young Black and Brown girls are encouraged, they blossom. Some called this organization racist while missing the point that these girls come from a predominant Black and Brown area of Oakland, CA, an area that is slowly losing its identity due to gentrification. Director Linda Goldstein Knowlton shows how Anayvette and Marilyn are so committed to the girls they were willing to sacrifice their own stability. One cannot help but to be enchanted with these young women as they tackle obstacle after obstacle. In this climate of awareness, this film speaks to everything that is being protested. Instead of focusing on the fact this was created for Black and Brown girls focus how the girls find strength and grow in each other as well as the new world they encounter.

Nell Minow: The Radical Monarchs learn a lot of important lessons about social justice and cultural heritage, but the most important is that they have the courage and the ability to make the world better. It is a privilege to watch the founders of this group communicate through thoughtful lesson plans and their own example of leadership and community.

Liz Whittemore I want my 3-year-old white daughter to use the Radical Monarchs’ curriculum moving forward in her educational path. I want every single school, organized group, platform to seize the opportunity to spread love and truth in the way the Radical Monarchs do. This group and this documentary highlight the need to create spaces for girls of color to feel seen and heard. We Are The Radical Monarchs is incredibly important for white women. Visibility matters. Experience matters. Not just being an ally but actually showing up. Read full review.

Jennifer Merin We Are the Radical Monarchs is Linda Goldstein Knowlton’s engaging documentary about an Oakland-based alternative to the Girl Scouts created by two concerned Moms specifically for girls of color, ages 8-13. The girls learn to respect individual identity choices and different cultures, and earn badges for social justice activities including projects to promote causes such as Black Lives Matter, Radical Beauty, Disability Justice, and being an LGBTQ ally. Filmed over three years, the documentary follows the troupe’s development, and chronicles the challenges faced by the dynamic co-founders as they grow the organization, both pre-and-post the 2016 election. The girls in the troupe are fabulous young heroines. They represent hope for the future.

Loren King Who wouldn’t want to be part of the Radical Monarchs, a much cooler version of the Girl Scouts with a focus on social justice and empowerment for young Black and Latina girls? Director Linda Goldstein Knowlton’s winning documentary We Are the Radical Monarchs is a compelling and moving introduction to this grassroots group. Read full review.

Susan Wloszczyna: Who are the Radical Monarchs you might ask. Think about a progressive scouting troop based in Oakland, Calif., that is dedicated to girls of color aged 8 to 13, one that empowers them to speak out on the wrongs and prejudices that are infecting our nation right now while learning how to stand up for social justice in myriad forms. Read full review.

Sandie Angulo Chen: We Are The Radical Monarchs is an in-depth look at an alternative girls’ organization started in Oakland, Calif. centering on teaching girls of color about social justice and activism. Founded by two outspoken mom friends, one Latinx, one Black, both queer-identifying and well-versed in community organizing, the Radical Monarchs (formerly known as the Radical Brownies) teaches and empowers their troop members to stand up for their communities and make a difference that goes beyond the leadership, service, and volunteerism that’s paramount to the Girl Scouts. As a Girl Scout troop leader of a diverse group of young women, I was worried the documentary would be some sort of takedown of Girl Scouts, but it wasn’t at all about bashing the traditional scouts; it’s simply an exploration of a need these two mothers saw in their communities for a different sort of group with even more progressive values and priorities. Director Linda Goldstein Knowlton’s documentary is a powerful chronicle of how the two leaders help brown and black girls from different backgrounds come together to learn about everything from Black Lives Matter to LBGT allyship to tenants’ rights to the local history of the Black Panthers and immigration laws. They may not be selling cookies, but they dog the usual scout activities like crafting, talking, having snacks, reaching out to women leaders, and learning to camp. An ideal documentary to watch for liberal-leaning families with girls.

Cate Marquis A pair of community organizers notice that while there are programs for at-risk boys of color, there are none for young girls of color. And so they come with a radical idea: a Girl Scouts-like organization built around feminist values and social justice. It is called Radical Brownies – no, wait, Radical Monarchs. Thus is born the organization that is the subject of the inspiring documentary We Are The Radical Monarchs, a group that aims to empower young girls of color, give them tools for life and education them on tolerance, inclusion and justice issues. It all starts with two mothers in Oakland, CA but with ambitions to expand the program to reach girls in other cities who are 8-13, a vulnerable age. The idea unfolds against the backdrop of Ferguson and Black Lives Matter, focusing on the founders struggles and showcasing some wonderful young girls.

Title: We Are the Radical Monarchs