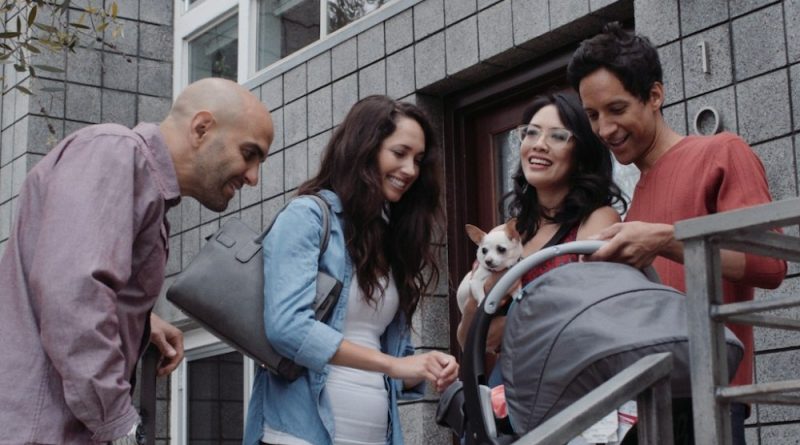 Babysplittlers is a film about two couples who love the life they live, want a baby, but want to maintain their sense of freedom — all at the same time. Each couple has one spouse on the fence about potential parenthood. Over a dinner date, they jokingly suggest that splitting parenthood between the two couples would be an optimal life choice. After receiving less than stellar test results they decided their jest might be the best solution for everyone. This unconventional story about becoming a mom and dad… and a mom and dad, has highs and lows.

Jeff, Sarah, Don, and Taylor are each keeping a secret which obviously leads to complications in the second half of the film. It is Sarah and Don that agree to mix their DNA based upon the information each character shares in the first half of the plot. The discussion of the mechanics of how this will take place are amusing enough until it comes to d-day of the physical act. This scene alone felt like it ran for an eternity. Then almost immediately, Sarah gets pregnant. Plot twist, it’s twins. What does an unconventional couple co-parenting do? Find a gay couple to add to the mix, of course. While this fails, yet another plot twist arises. I won’t spoil that one…because there is a final one coming in the end. Looking back now, once all is revealed, the choice to keep secrets pretty much negates the entire agreement.

The film is about 40 minutes too long. We know a lot about Sarah and Jeff and very little about Don and Taylor, in comparison. We repeatedly see Jeff at a job is beginning to loathe and an almost equal amount of scenes of Sarah as a parking enforcement officer. While we do see Don’s job as a trainer in perhaps two scenes, we see Taylor’s dance studio for a very brief interlude. In truth, we’re following Jeff the most, since he has added scenes with his therapist. This adds levity in emotional transitions, but eventually, it becomes formulaic and overplayed despite the great acting by Mark Feuerstein playing the therapist. My point is that without a more balanced approach, I wasn’t as invested in Don and Taylor as much as I probably should have been. I didn’t think the fallout from the secrets had enough real-world weight to them. This felt like another opportunity to add relatability to our couples. And while happy go lucky and not so happy go lucky montages are fun and realistic, they didn’t make up for the prolonged runtime.

The performances are certainly the highest point of Babysplitters.  Danny Pudi, Emily Chang, Eddie Alfano and Maiara Walsh are well cast. Pudi is a fantastic leading man. He is funny and smart. I’d love to see more of him in any role. Chang is genuine and grounded. They are amazing foils for one another. Alfano and Walsh are superb even if we don’t get as much of them. While the premise is pretty silly, from someone who experienced many of the issues they poke fun of in the film, this was a personally a tough pill to swallow. The jokes about abortion, fertility issues, and geriatric pregnancy are far too casual. This may offend a huge portion of the audience. It’s a difficult balancing act for writer/director Sam Friedlander. On the upside, there are plenty of actual laughs to be had here. Babysplitters will undoubtedly trigger a conversation about what modern parenting looks like. We’re all experts until we have kids of our own. The world is changing rapidly, parenting must evolve with it.