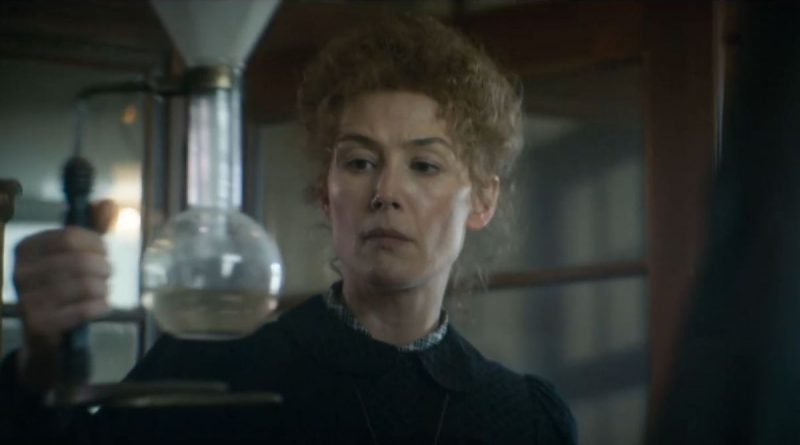 After Marie and her future husband and research partner Pierre Curie (Sam Riley) literally bump into each other on the Parisian streets, their intersecting destinies become sealed. The fact that the luminous element Marie discovered and the experiments they achieve will do a number on the state of their health for the rest of their lives is a macabre twist to their place in history.

Based on a graphic novel, director Marjane Satrapi (the Oscar-nominated Persepolis) puts some visual polish on Marie’s pursuits as she eventually becomes a mother to two smart daughters while becoming the only woman to win the Nobel Prize twice, for physics and chemistry. The Curies also cross paths with another historical figure, the so-called Serpentine dancer Loie Fuller, who spins about in a billowing white costume illuminated by colored lights.

I applaud any movie that has science embedded into its script to use what sounds like an eerie Theremin effect on its music soundtrack. That the storyline also jumps into the future to portray radium as a source of both good (X-rays, chemotherapy) and evil (the atomic bomb, Chernobyl) is fair game. I can’t say any character besides Marie leaves a major impression on the viewer. But given how many male-driven biopics portray women as supporters of masculine ambitions, it is always good when turnabout is fair game.