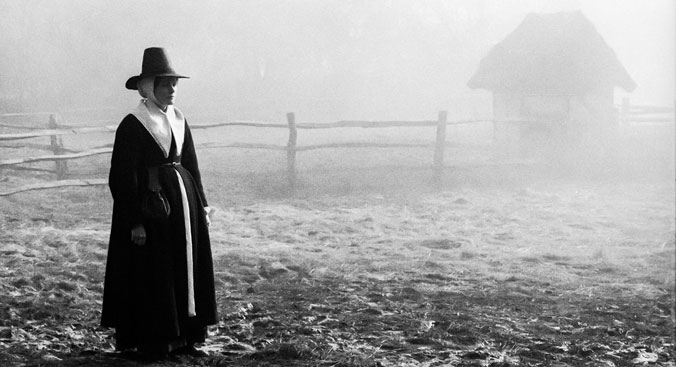 Writer/director Thomas Clay is clearly a man of vision. Production on his latest feature film Fanny Lye Deliver’d started in 2011 and the project’s first major blow came when the movie’s producer, and Clay’s long-time collaborator, Joseph Lang, passed away. Shooting began in the winter of 2016 in the English countryside; itself a difficult prospect with flooding that nearly led to the set being washed away. Then partway through post-production, the project ran out of money and Clay was forced to take on more than he had anticipated including editing, colour grading and eventually even scoring the film, a process that alone took a year to do. Finally in October of 2019, Fanny Lye really was delivered when the film premiered at the London Film Festival.

The fact that Fanny Lye Deliver’d exists at all is impressive but Clay’s decades-long struggle to produce his vision doesn’t fully work.

Maxine Peake and Charles Dance star as Fanny and John Lye, a husband and wife who, with their young son Arthur, are Puritans living on a remote farm in the English countryside. A former army coronal with a bad leg, John spends most of his time overseeing the day-to-day operation of the farm and a strict religious home while Fanny is the work horse, carrying out most of the duties around the farm and taking care of her husband and son.

The family’s somewhat idyllic (for the men, at least) life is shaken when the family comes across Thomas and Rebecca (Freddie Fox and Tanya Reynolds, respectively), a young couple taking refuge in their barn. Thomas weaves a story of bandits having robbed them on the road and though John is skeptical, he agrees to let the couple spend the night; a choice that will forever change all of their lives.

The second half of Fanny Lye Deliver’d features a series of unexpected turns that peaked my interest. But, sadly, it was too little too late. Clay’s idea to tell the story of the personal and sexual awakening of an oppressed woman is a great concept but the execution leaves much to be desired. The voice over throughout is flat and droning, Clay’s score is sometimes overwhelming and often feels out of sync with the unfolding scene, and the movie looks drab, especially in the wake of The Witch, another film that takes place at around the same time period and also captures a remote Puritan lifestyle.

My biggest complaint about Fanny Lye Deliver’d is that the movie’s first half is long winded and largely uninteresting. It serves the purpose of spotlighting just how abused and ignored Fanny is but the same could have been accomplished in half the time. By the time Thomas weaves his ideology and whips both Fanny and Rebecca into a sexual peak, perhaps the movie’s most dynamic scene, any interest I had in the movie had largely evaporated.

Though it’s deeply flawed, on top of everything else I found the movie to be cold and emotionally removed. But, Fanny Lye Deliver’d isn’t without merit. It features a number of excellent performances, particularly from Maxine Peake as Fanny. Clay’s choice to leave the camera on her for extended moments is one of the few things that really work.

While I appreciate Clay’s unwillingness to compromise on his vision, I hope his next project will fare better because Fanny Lye Deliver’d is a largely forgettable effort.