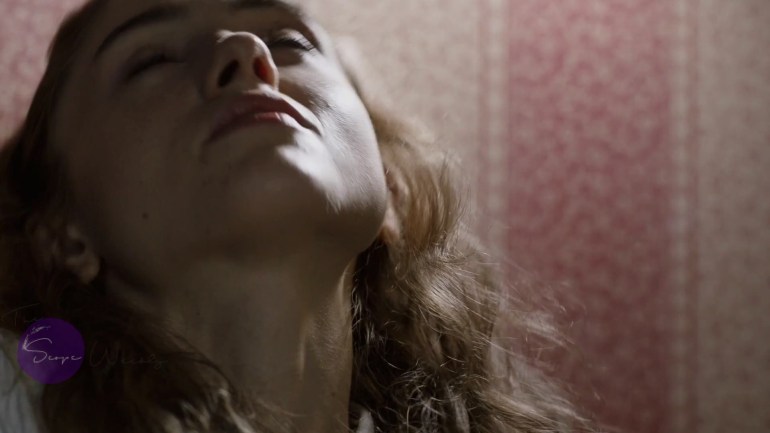 Describing the supposedly incompatible levels of sexual excitement experienced by men and women to a class full of high-schoolers, Father Murphy (Timothy Simons) relies upon an easy, clumsy simile: males are like microwave ovens while females are more akin to conventional ovens. The priest expands upon his meaning, in case it isn’t blatant, and also stresses that any sexual activity beyond a marriage between two members of the opposite sex is forbidden by god. Proclaiming his message of abstinence to hormone-fuelled teenagers, he’s trading in shame and guilt, which Alice (Natalia Dyer) picks up loud and clear. Chatting to her friend Laura (Francesca Reale) in the hallway afterwards, she’s shocked and horrified that masturbation is considered sinful — even though she couldn’t have been more chaste to this point, either with someone else or by herself.

So unfurls two of Yes, God, Yes’ pivotal early scenes, laying the foundation for an amusing and astute comedy about a topic so often ignored by society at large. The film is focused on shame and guilt too; however exposing the hypocrisy behind making teens — and girls especially — feel as if they’re damned to hell for exploring their sexuality is its aim. The feature directorial debut of Karen Maine, as based on her own short film of the same name, it sits nicely beside the screenwriter-turned-filmmaker’s other big-screen credit. Penning 2014’s Obvious Child, which was also adapted from a short film she wrote, she examined another aspect of women’s lives that’s frequently avoided, with that film following a twenty-something’s decision to have an abortion after a one-night stand.

After Father Murphy’s heavy-handed attempt to steer Alice and her fellow Catholic school students away from sexual gratification, she quickly realizes that his words ring hollow. The catalyst: the internet. With Alice previously indulging her desires by rewinding her VHS copy of Titanic back to Leonardo DiCaprio and Kate Winslet’s steamy sex scene over and over again, and with the film’s soundtrack littered with late 1990s and early 2000s tunes, Yes, God, Yes is set around the turn of the century — and those AOL chat rooms can get saucy. Following an unsolicited exchange involving racy pictures and spicy talk, Alice suddenly has self-pleasure on her mind. When she attends a school bible retreat and meets handsome camp counselor Chris (Wolfgang Novogratz), she has other lusty thoughts, too. But, thanks to a lifetime of church-driven scolding, Alice can’t shake the feeling she’s doing something wrong by getting hot and bothered. A nasty, unfounded rumor going around about her, her previous crush (Parker Wierling) and a sex act doesn’t help.

Maine writes and directs Yes, God, Yes fluidly, thoughtfully and loosely based on experience — she too was once a good Catholic girl grappling with her yearnings — but the film is personal in a universal sense. It hews close to Alice and the minutiae of her situation, explores the details and knows that being specific is often the doorway to broader resonance. Indeed, the end result always smacks of being crafted by someone who has walked this path, come out the other side and can now look back clearly. Having Alice stumble into a lesbian bar near her school retreat and hear wise words from the establishment’s ex-Catholic owner (Susan Blackwell) about self-acceptance, sexuality and the fact that everyone is just trying to sort themselves out is a particularly canny touch in this regard.

That said, Yes, God, Yes doesn’t really tell audiences anything new: that practicing what they preach isn’t many narrow-minded religious figures’ strong point will come as a surprise to no one, and nor will the plain truth that women feel libidinous despite far too many claims by men otherwise. This engaging, often very funny and perceptively paced film still feels revelatory, though, in honing in on one teenager’s quest to transcend the shame and guilt that’s been drummed into her — with exceptional help from Stranger Things’ star Dyer. Her facial expressions, especially as she’s overtly struggling with sensations she’s ill-equipped to process, scream through Alice’s confusion to find clarity and catharsis. They’re also equally earnest and comical. When it premiered at SXSW in 2019, Yes, God, Yes won the ensemble acting award for its cast’s efforts; however, in self-love and in movies about it alike, this film is all about one person.