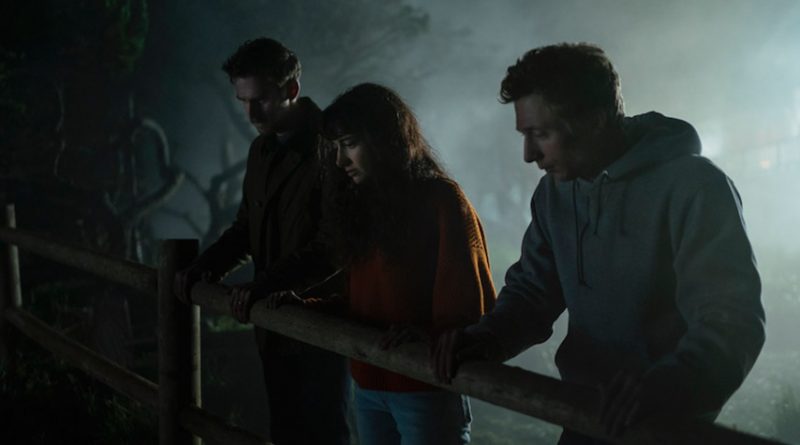 The Rental is a tightly wrapped movie–88 minutes in all– that eschews predictable and cheesy jump scares for authentic and lingering thrills. The next time you rent a vacation home I bet you’ll check out all the showerheads and potted plants.

In The Rental, two couples want to celebrate a successful business deal. Charlie (Dan Stevens, The Call Of The Wild), his wife Michelle (Alison Brie, Franco’s real-life wife/star of TV’s GLOW and Community) along with his business partner Mina (Sheila Vand, TV’s Snowpiercer) and his brother/Mina’s boyfriend, Josh (Jeremy Allen White, TV’s Shameless) decide on a weekend getaway. They go online and find the perfect Airbnb. Yeah, it’s overpriced, but my goodness, that ocean view is simply spectacular. They pack up everything including their French bulldog Reggie, although the house rules specifically state no pets are allowed. When they arrive, they meet the property manager Taylor (Toby Huss, TV’s Reno 911!) who looks after the place for his brother. Taylor is an odd character. There’s something about him that rubs Mina the wrong way. In fact, Mina, who is Middle Eastern, initially tried to make the house reservation, but Taylor turned her down over the phone. A couple of hours later when Charlie calls, he’s able to easily book it. Mina thinks the guy is a racist creep and she might be right.

Everyone else is telling Mina to forget him and just enjoy the place. As much as she tries, Mina feels that something just isn’t right about Taylor or the house.

Once they all settle in for the evening they discuss plans to hike and do some sightseeing although Michelle makes it known that she wants to drink, do drugs and hang out in the hot tub more than anything.

The Rental takes its time. Our interest in the characters and their quirky personalities grows as the film gathers momentum.

Mina swears someone is watching them or maybe it’s just her paranoia. The real red flag should have been when old Reggie the dog hightails it back into the house looking as if he’s just seen a ghost. He’s seen and heard something. No surprise that Reggie later mysteriously disappears.

Is there a stalking maniac on the prowl set to take out Charlie, Michelle, Mina and Josh? I’ll never tell, but Franco sure has a few tricks up his sleeve that keeps us guessing as to what will appear out of the fog and scary atmosphere that he effectively creates. Even the music in The Rental is hauntingly foreboding and will keep you on edge.

The Rental opens at select Drive-Ins and is available On Demand July 24.