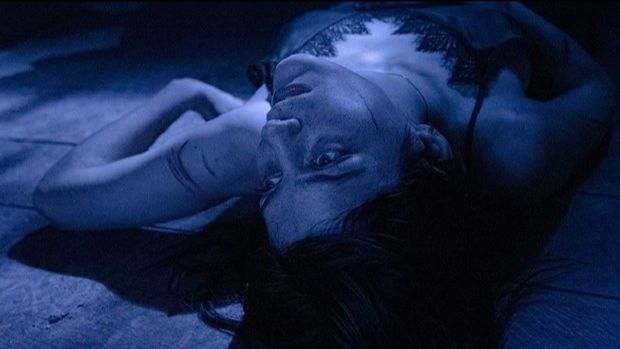 Emotionally fragile Janine (Amber Anderson) returns to her family’s vast country estate for her grandmother’s funeral and is sucked into a mire of family dysfunction in this arthouse horror movie that is neither as clever as it aspires to be nor as effective as such similarly themed—though wildly different films—as Larry Cohen’s It’s Alive (1974), Andrzej Zulawski’s Possession (1981) and Guillermo del Toro’s The Orphanage (2007).

Janine’s father Claus (Udo Kier) is haunted by his own miserable childhood: His mother was “a horrible woman” who took a venomous dislike to Claus’ girlfriend Rose, whom he nevertheless married. Rose, never recovered psychologically from the birth of their second child, Janine’s younger brother Isaac, who was terribly physically deformed and died in infancy. That the family seat is a country-mansion of secrets is evident from the outset and to call Janine high-strung is the understatement of the year. Flashbacks to her party-girl past—lit as though they take place in some satanic-scare movie vision of hell—suggest that even far from the haunted mansion she’s ill-equipped to make emotionally constructive decisions and should not be hiding her prescription meds in the strawberry jam. Which is a nice image but really, wouldn’t dropping the red-and-white capsules in the nearby river be a more sensible way of getting rid of them? And returning stirs up disturbing memories of Isaac and worse. In any event, the film’s chronicle of a breakdown foretold feels painfully attenuated despite the film’s just-shy of 90-minute running time.

This is no fault of UK actress Amber Anderson’s. Her performance is both committed and subtle; that Janine is losing her grip on reality is obvious, but she conveys a powerful sense of someone trying to hold it together under incredibly stressful circumstances and her outburst at the funeral has a desperate energy that feels authentic rather than theatrical. Veteran actor Udo Kier and Jefferson Hall—who plays the man with whom Janine should not be getting involved—are solid and the film features an effective set piece in the village festival that involves traditional costumes, folk dancing and a fellow in a Krampus-like creature costume. Unfortunately, it recalls similar scenes in more insidiously disturbing films like The Wicker Man (1973) and Midsommar (2019)

Christian Neumann, making his feature-film debut after writing/and or directing a long list of shorts, is a capable director let down by his own original screenplay, which isn’t sufficiently original to make the finished film stand out from many other psychological horror stories that unfold in apparently idyllic settings tainted by real-life sins and demons of the mind.