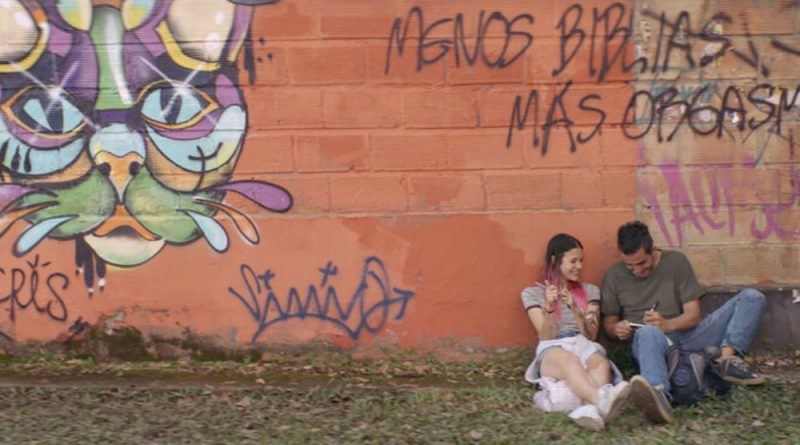 In the streets of Medellín, Colombia, two teenagers wander. They could be students: They carry backpacks, they’re engaged in animated conversation, they pass a notebook back and forth. There is clearly a partnership here, and a sense of shared interests, and a common purpose—but Days of the Whale doesn’t indulge in this educational artifice for long.

Cristina (Laura Isabel Tobón Ochoa) and Simón (David Escallón) are graffiti artists from different classes and different backgrounds, and their flirtation, from the very beginning, is against a backdrop of increasing danger.

Filmmaker Catalina Arroyave Restrepo’s debut follows these young adults through the various neighborhoods of Medellín: the upper-class apartment building where Cristina lives with her father and stepmother; the stucco home, sunk away from the street, where Simón lives with his grandmother. Yet neither of them sees their family much—instead, the two are often with each other, working together to put up layered, detailed works of art. A cat’s face in turquoise and lavender. A monkey in royal purple. Their clothes are splattered with paint and their fingers dyed with it. And their refuge is an art collective space, a sort of community haven, run by the slightly older and wiser Lucas (Carlos Fonnegra). Alongside similarly tattooed, creatively haired young adults, Cristina and Simón plan out their next projects, work on collaborative pieces, tutor children who come in looking for art lessons, and take care of a street dog they adopted.

It would be idyllic, if the part of Medellín that the art space is in weren’t threatened by gang enforcers who demand payment from Lucas. “Money solves everything, man,” these men insist, but what is left out of that conversation is that they’re demanding money as protection from themselves. What options does Lucas have against men who very seriously mean the threat “snitches get stitches”? He worries about the members of the collective speaking up against the pressure. He thinks Simón is putting them all in danger by publicly mocking the enforcers’ warnings. And when Cristina becomes increasingly set on painting a wall that the enforcers had previously claimed as their own, Lucas tries to convince her otherwise.

On the one hand, Days of the Whale has us wonder, why are Cristina and Simón inviting trouble upon themselves? Events in both of their lives—Cristina’s mother being a journalist, Simón having grown up with the enforcers and knowing that they aren’t joking around—would suggest that they should know better. But on the other hand, if art is stopped as a form of personal expression, what else do people have? As acts of individualism and resistance, the images Cristina and Simón work on together are integral to their own personhood. Isn’t that worth fighting for?

Days of the Whale benefits from a tight focus that puts these teens, in particular Cristina, front and center, and a script that shares information without bombarding us with it. Cristina’s home life is particularly well-communicated, from how lost her father feels raising a teenage daughter, to Cristina’s tension with her new stepmother, who seems barely older than she is, to the longing she feels for her mother, who moved away and who doesn’t understand why Cristina hasn’t yet joined her. The additional context helps us understand Cristina’s divided alliances: The art space is where she feels most comfortable, but it’s unprotected; her home feels like a prison, but she is safeguarded by her familial wealth. Ochoa’s performance is quiet but resilient; to underestimate her doe eyes and slight frame would be a mistake. With a graffiti can in her hand, Ochoa is fluid and confident, and Restrepo makes the right choice in punctuating the film’s increasing tension with scenes of painting and creativity to underscore what these teens are adamant about expressing.

Brief moments of magical realism don’t exactly jibe with the film’s otherwise quite grounded approach, which uses brief moments of brutality to make plain increasingly dire circumstances: bodies abandoned in a soccer field, a glaze of blood seeping into a tile floor. Against that backdrop, the beautiful moments in Days of the Whale seem that much starker—and perhaps that much more imperiled. Alongside other modern Latin American films like Tigers Are Not Afraid and Monos, Days of the Whale paints a portrait of youth in revolt, desperate to find a voice in places that would rather harm them than help them. We shouldn’t look away.