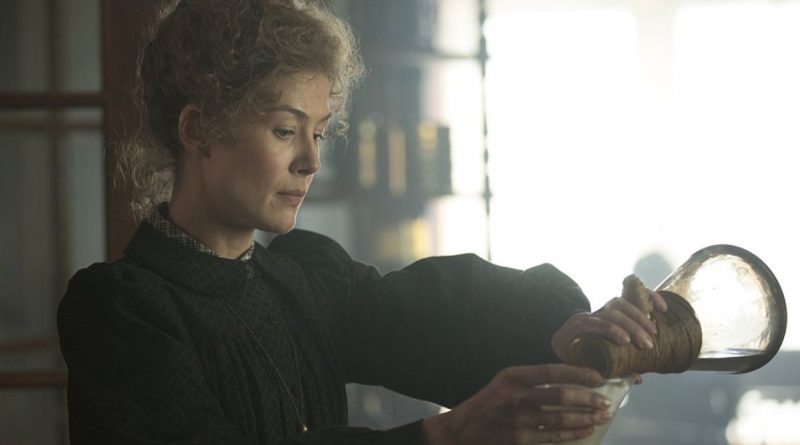 Marie Sklodowska-Curie is the first woman to win a Nobel Prize and the only individual awarded Nobel prizes in two different scientific fields, in 1903 for physics, shared with husband Pierre and physicist Henri Becquerel, and in 1911 for chemistry. Less well known are details of her extraordinary life: remarkable scientific expertise, unprecedented discoveries, and steadfast resolve.

Director Marjane Satrapi’s Radioactive is a film equal to her subject: creative, insightful, and thrilling. Based on Lauren Redniss’ 1910 Radioactive: Marie and Pierre Curie: A Tale of Love and Fallout, Satrapi displays the dazzling flair she brought to her 2007 animation adaptation of her autobiographical graphic novel Persepolis. She has the perfect gift to translate Marie Curie’s complex, fascinating life to film: unfettered imagination.

Radioactive begins in 1934 Paris, Marie fatally ill from exposure to radiation. From there the story unfolds with flashbacks within flashbacks, to Marie and Pierre’s first encounter in 1893 Paris, and then earlier, to her mother’s death in 1878, a trauma that haunted Marie. Spanning fifty years, the overlapping narratives (always clear and distinct through three time periods) focus on Marie and Pierre’s hard work in sometimes dingy labs. Further, recognizing the dangers and the benefits of scientific discoveries, detours jump forward to include scenes of the Enola Gay, 1945 Hiroshima, and the atom bomb test in 1961 Nevada, but also the positive results with x-rays and cancer treatment.

As Marie Curie, Rosamund Pike appealingly establishes Marie’s feistiness, her assertive demands for respect, and her commitment to inquiry, a three-dimensional woman. Sam Riley’s Pierre offers Marie’s lovely complement, acknowledging her brilliance and in love with her strength. Jack Thorne’s screenplay sparkles with wonderfully literate, lively exchanges. Production designer Michael Carlin and cinematographer Anthony Dod Mantle interpret every nuance with vibrant colors and the glow of radium, even in hospital corridors. At the helm, director Satrapi flawlessly conveys this inspirational, enthralling story. One of the best films of the year for its subject, its style, and its sophisticated understanding of science and scientists, Radioactive is available on Amazon Prime.