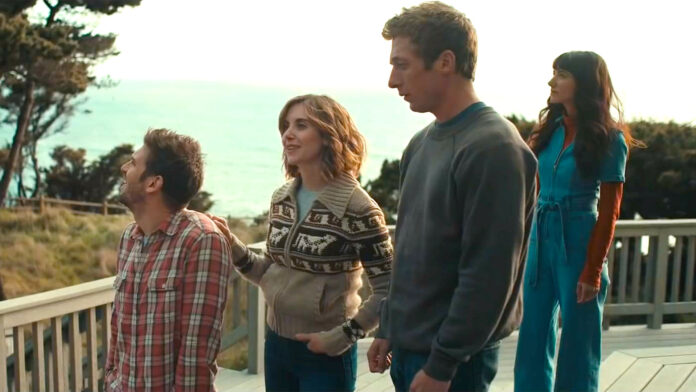 I remember when it happened. In March 2019, I read the headline for an article by Sidney Fussell at The Atlantic that declared “Airbnb Has a Hidden-Camera Problem”. And lo, a phobia was born. There had, of course, been previous stories circulating in the news about surveillance camera happy hosts who used the online holiday rental app to spy on their guests back when business was booming in the now barely recalled pre-COVID times. But something about The Atlantic article really struck a chord with me, formalizing in my mind what would became a straight-up deep-seated paranoia.

It’s the stuff of horror movies, with all the ingredients for a perfect tale of terror as it tapped into anxieties around what was – even a few months ago – the widely ubiquitous experience of short-term vacation rentals. So it was really more of a question of “who” and “when” this material would find its way into a big horror film, rather than “if”. The Rental embraces its premise with full force and mines it with unflinching determination, using it as an entry point into a whole range of narrative and effective possibilities.

The story follows four characters – two brothers Charlie (Dan Stevens) and Josh (Jeremy Allen White) and their respective partners, Charlie’s wife Michelle (Alison Brie) and Mina (Sheila Vand), Charlie’s business partner who is also dating Josh. To celebrate the signing of a career-making contract, Charlie and Mina decide that the two couples should indulge in an expensive weekend getaway in a plush seaside mansion, hoping for a bit of R&R before their workloads escalate and quality time with partners and family comes to a halt. Enter Taylor (Toby Huss): an undisguised racist who takes an instant dislike to Middle Eastern Mina who is their host for the weekend. As forbidden desires amongst the quartet bubble to the surface and tensions escalate, it soon becomes apparent that secrets might not remain as closeted as some had hoped.

Directed by actor Dave Franco, the cynical, schadenfreude-drunk desire to see actors-turned-directors fail in their transition to working behind the camera once again fails to eventuate, and Franco does a superb job in his feature debut. Franco directs with a confident, steady hand and his chops as an actor manifest impressively with just how well he works with his small ensemble cast – he clearly knows his way around a film set, and how actors and the camera best interact. While each performer is strong and grasps the nuances of their characters with ease, it is Vand and White who really are the standouts, both deserving public profiles much greater than they currently have.

Franco also tackles co-writing duties with indie darling Joe Swanberg, and the latter’s familiarity with genre mechanics are visible throughout the film. But rather than what happens, the thrill of The Rental is how it happens – it’s the complex inner workings of the relationships between the characters who find themselves in increasingly challenging circumstances that largely drives the film. The Rental is a getaway-turned-nightmare classic-in-the-making that confidently weaves real world anxieties with all the twisted, sinister possibilities the horror genre affords.