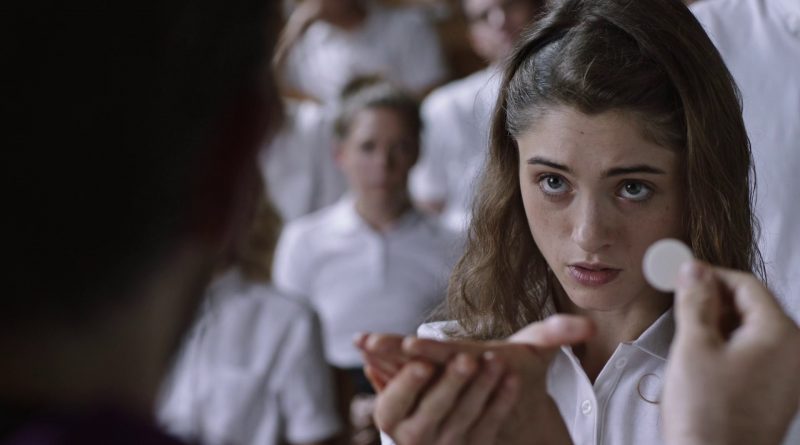 This is a little film in every way: it runs fewer than 90 minutes and is of little import. But Yes, God, Yes just might help someone, say, a teenage girl who’s told that her human sexuality is filthy. Inside the film’s plot sits a character who saves the main character as someone once saved the director in real life.

Alice, 16, lives in Iowa with her family in the early years of the 21st century, but in her parochial school, the year seems to plop in the middle of the 20th. Or 19th. Her sex ed. class teacher describes girls as ovens and boys as microwaves in terms of the heating elements. This analogy does not illuminate our tiny Alice. When she is accused of a highly sophisticated sex act with a co-ed, she doesn’t even know what the phrase means.

She asks Mrs. Google. And even then has to keep asking because the act, the phrase, is over her naive head. She keeps asking, curious, until the owner of a Lesbian bar explains it to her and also kindly suggests that Alice look for a college on the coasts, far from Iowa. It’s almost as if the woman, been there/done that, remains grateful for such guidance and passes the torch.

Alice has run to that bar from a religious retreat, where all the retreatants wear burnt orange sweatshirts with the cross of Sts. Peter and Paul on the front. She goes there to seek redemption from the rumor. But it’s is also where she sees the most devout being sexual, doing what they say not to do.

Alice, who confessed to her priest that she re-watches Titanic for the sex scene, cannot take her eyes off the very masculine, very hairy arm of a counselor, a nice turn around from men/boys panting and ogling women/girls in films since Buddha wore baby booties.

Natalia Dyer (Stranger Things) personifies the adolescent. Susan Blackwell plays her sweet savior. The story by director Karen Maine, who co-wrote the amusing Obvious Child, is semi-autobiographical. Yes, God, Yes is slight, offering little besides the story, but that story may just save one young woman from the Puritan propaganda designed to make her feel sinful just for being incarnational.