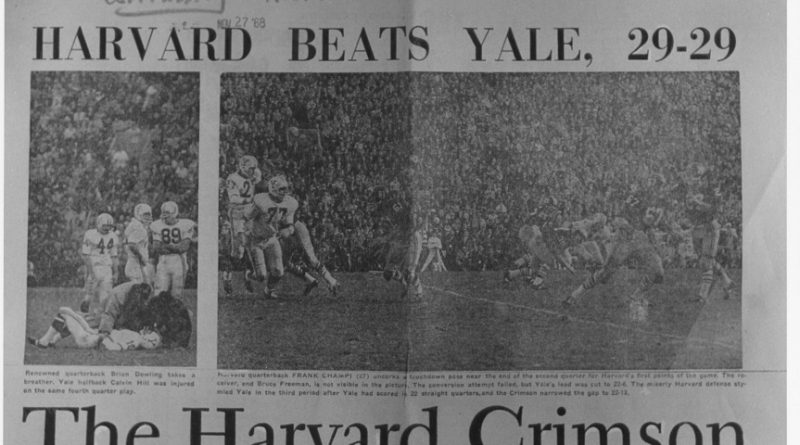 Kevin Rafferty, filmmaker and Harvard grad, uses archival footage and interviews with team members to ‘replay’ the legendary football game in which the undefeated teams of Harvard and Yale battled it out for the 1968 season’s final victory. The film’s title, Harvard Beats Yale 29-29, may give away the results, but the football plays, commentaries and remembrances presented in this sports documentary are gripping–even if you’re not a football fan.

It was 1968, a tumultuous year in American history. There were race riots, protests against the Vietnam War and incidents of police violence against civilian demonstrators. Social and political turmoil turned college students on campuses across the nation into activists–even within the privileged confines of Harvard and Yale.

Against this background of social strife, however, students at these still male-only Ivy League institutions seemed to unite in support of their respective football teams, the Harvard Crimson and Yale Bulldogs. At the end of the season, each of the teams, as it happened, were undefeated. Harvard Beats Yale 29-29 is about their historic playoff.

Director Kevin Rafferty uses footage from the game, showing crowd-pleasing play complete with instant replays, to show how the Harvard Crimson, the underdogs, recovered from what looked to be sure defeat at halftime, to tie the Yale Bulldogs 29-29. Yes, that’s a tie. But the circumstances were so extraordinary that both Harvard and Yale considered the game to be Harvard’s victory.

The football plays are interspersed with commentaries by Crimson and Bulldog teammates–including actor Tommy Lee Jones, who was playing for Harvard–expressing their utter amazement at how the game played out. They felt as though they were in a dream, they say. Continue reading on CINEMA CITIZEN