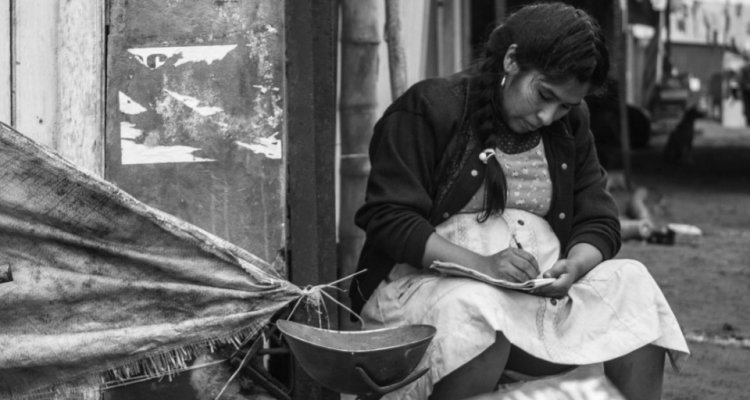 Song Without a Name tells the tragic tale of a stolen infant in 1980s Peru.

In Song Without a Name, Peruvian director Melina León with tender compassion tells a tragic tale of abducted newborns. Never hurried, the story unfolds at a measured pace with maximum impact devoid of sensationalism. With the perfect choice of black and white cinematography, the images complement the 1988 time frame and the milieu of the indigenous mother Georgina Condori.

She and her partner Leo, both without official IDs, sell potatoes at the village market where the twenty-year-old, pregnant Georgina overhears on the radio that free medical care is available at a nearby hospital. Lured there by her need, she delivers a baby girl who is immediately whisked away. Hysterical and desperate, she and Leo attempt without success to file a report at the Palace of Justice. Appeals to Pedro Campos, a reporter for the La Reforma newspaper, advance their cause as it uncovers institutional corruption.

The pervasive, repressive political environment does not escape notice with several scenes involving Shining Path terrorists and rampant homophobia. For example, Pedro receives a death threat because he is gay as well as for his investigation of judicial and military support for baby abductions and sales, most often to Europe. Stunning compositions telegraph the abhorrent victimization of this couple. For example, Georgina and Leo walk very slowly up steps to the entrance of the Palace of Justice, dwarfed by the huge columns and edifice. Similarly, even the Justice hallway swallows them in its enormity as does the barren hillside to their shack that, Sisyphus like, they must climb or descend daily. As Georgina, Pamela Mendoza, in many closeups, powerfully expresses the depths of despair.

Because most of the scenes unfold without interpretive, background music, Pauchi Sasaki’s atonal score accompanying dire events lends added impact, as do the musical interludes interspersed at periodic junctures. Through masked performers and dances, celebrations provide welcome festive events while also offering insights into the Ayachuchan community, situated in the Peruvian Andes.

Most tragically, this is inspired by true events, just one example of hundreds of babies stolen and sold. Co-writer/director León (whose father was one of the investigating journalists) offers a chilling and important story, admirably told, with a concluding song that is haunting and heartbreaking. In Spanish with English subtitles, Song Without a Name is available at the Film Movement website.