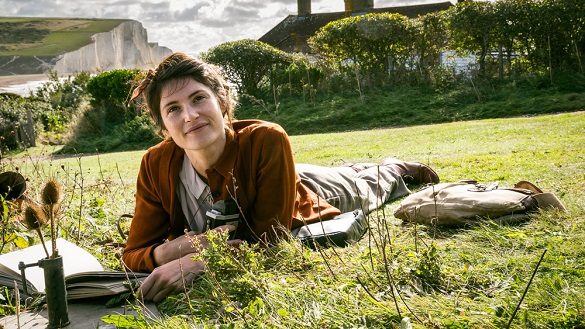 Writer-director Jessica Swale’s feature debut takes us to World War II Britain, where keep-calm, carry-on proprieties reign in a quiet coastal village far from the perils of London during the Blitz.

In an isolated cottage overlooking the sea, reclusive Alice Lamb (a fierce yet tender Gemma Arterton) has no interest in having anything to do with her neighbors. She’s too busy pursuing academic research, seeking scientific explanations for ancient folklore and myths.

No wonder the local children chatter that she’s a witch. Or maybe a Nazi spy.

Given the kids’ habit of stuffing her mailbox with twigs and leaves, Alice misses the official notice that a young evacuee from London is coming to stay: Frank (plucky Lucas Bond), whose father’s in the Royal Air Force and whose mother is busy aiding the war effort.

Alice greets the curly-headed lad with the news that she’s unloading him as soon as possible.

His welcome at the local school is hardly warmer — especially when his scrappy seatmate (Dixie Egerickx) draws a chalk mark down the center of their collective desk, informing him she’s “an individualist,” “a maverick” and “a free-thinker.” Just like Alice.

As Frank struggles against his fears for his parents, Alice finds herself reliving memories of her long-lost love from university days: Vera (the radiant Gugu Mbatha-Raw), a fellow writer who broke things off because of her desire for motherhood.

No prizes will be awarded for predicting the inevitable thaw in Alice’s attitude toward Frank, particularly when he joins her on her expeditions to find scientific evidence of “The Summerland,” a pagan version of the afterlife.

If only the postcard-pretty Summerland had confined itself to Alice’s grudging acceptance of, and affection for, Frank, it would have been utterly predictable but undeniably poignant.

Unfortuntely, Swale — a playwright whose hit Nell Gwynn starred Arterton and Mbatha-Raw — has too many other things on her mind, and her agenda, to settle for that.

Time and again, characters spout dialogue — and display perspectives — so grindingly contemporary they might as well be accompanied by a flashing “author’s message” sign.

That fatally undercuts Summerland’s dramatic impact and credibility. So does a major plot twist — which isn’t nearly as twisty as Swale seems to think — that can’t possibly overcome the melodramatic artifice of it all.