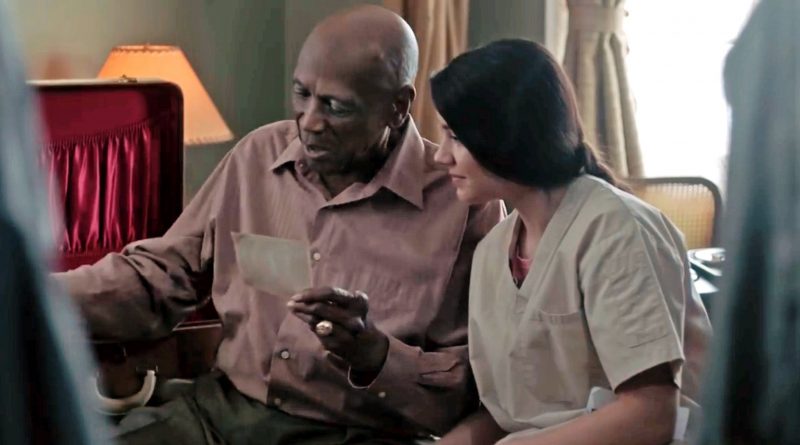 Chances are you’ll be hearing a lot about Academy Award-winner Louis Gossett Jr. (An Officer and a Gentleman) in the coming weeks. Not only has the 84-year-old actor landed a recent Emmy Award nomination for his star turn in HBO’s Watchmen, but Gossett Jr. is also garnering considerable attention for his outstanding performance in the wonderful new movie The Cuban from director Sergio Navarretta (The Colossal Failure of the Modern Relationship).

The touching love story finds Luis Garcia (Gossett) nearly wasting away at an assisted living facility. It’s cold and rigid and hardly the place for a former, vibrant, and legendary Cuban jazz musician like Luis.

However, due to Alzheimer’s and dementia, Luis can barely remember his name and only occasionally how much he was adored by his legion of fans. He hates the facility, the bland food and the robotic, yet well-meaning staff that continually looks after him.

That begins to change when a young, Afghan immigrant and pre-med student named Mina Ayoub (Ana Golja, The Fanatic) comes aboard and treats Luis with the dignity and respect that every patient at the nursing home deserves.

Mina lives with her Aunt Bano (Shohreh Aghdashloo, Star Trek Beyond) and working at the nursing facility is a nice escape for her since Mina’s aunt and uncle adhere to old family traditions. Her aunt tries to control her life and Mina’s uncle wants to arrange a marriage for her cousin.

Mina doesn’t need that drama and wants to chart her own path that may include her secret new boyfriend Kris (Giacomo Gianniotti, TV’s Grey’s Anatomy) who just happens to be a doctoral student in psychology and is writing his thesis on dementia. When she tells Kris about Luis, he is fascinated by what she’s done for him and wants to meet him. No one has been able to reach Luis like Mina has. Most of the care workers interacting with him have to deal with his outbursts and often need to sedate him.

It was Mina’s father who taught her to appreciate all kinds of music and they both were fond of Cuban jazz. So, when Mina notices a music poster of Cuban singer/bandleader Benny More on Luis’ room wall, she asks him about it and he slowly takes notice and opens up to her.

Before long, Mina is humming Cuban songs while tending to Luis and even goes so far to bring him home cooked Cuban food. It’s the start of something good.

Of course, most everything that Mina is doing for Luis is frowned upon by workers at the facility and she ultimately pays a price for breaking the rules, but the wonderful friendship she develops with Luis, is all worth it.

When Luis becomes more coherent, he begins to tell Mina about his days playing at the El Tropicana in Havana, the Copacabana and even the famed Cotton Club with Dizzy Gillespie. All of this is shown through flashbacks and this is when “The Cuban” really soars especially the film’s music which comes courtesy of Cuban/Canadian jazz pianist Hilario Duran.

We also see a mysterious woman in Luis’s flash back life that he loved as much as his music. Right when Luis is coming into his own, his estranged son arrives at the nursing home and requests to move him into a palliative care facility. Realizing that her time with Luis is slipping away, Mina and Kris cook up a plan to sneak Luis out of the nursing home for a surprise, fun-filled night with some of his old friends so he can perform on stage one last time. Boy, does he ever. The night is medicine for his soul.

The Cuban is a beautiful and heartwarming film about compassion, fulfillment, and friendship. The stellar cast makes it snap, crackle and pop.