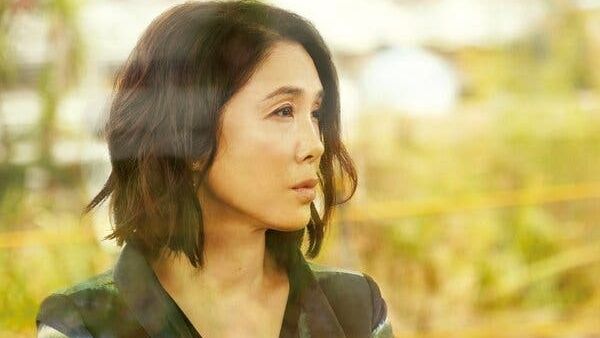 Much is in the eye of the beholder with A Girl Missing, an enigmatic drama from director Koji Fukada (Harmonium). The story concerns the damage done both by things said, and things unspoken; one woman’s life is turned upside down because of a crime that has almost nothing to do with her.

Ichiko (Mariko Tsutsui) is a visiting nurse in the Oishi household, caring for the aged matriarch and friendly with the woman’s teenaged granddaughters, Saki and Motoko. She even tutors the young women and is an obvious mentor. Motoko (Mikako Ichikawa) intends to be a nurse one day like Ichiko.

Much is made of Ichiko’s thoughtful nature, her work ethic and her pleasant demeanor. She is the consummate professional, skilled and empathetic with patients, and well respected by all. Her personal life seems likewise unblemished, albeit staid. She is engaged to marry a doctor.

Then a crime is committed by Ichiko’s nephew. It’s a highly publicized case, and at first, Ichiko doesn’t tell anyone that the man who has been arrested is her relative. When that becomes known, Ichiko’s life is pulled apart. A media frenzy over the crime is allowed to castdoubt on Ichiko’s character, ensuring that she loses her job, her home, her fiancé and any sort of future. She slides into a depression and decides to seek revenge.

A Girl Missing plays with past and present, moving in time between Ichiko’s blameless life as a devoted nurse and her machinations as a sort of mysterious femme fatale, carefully organizing payback. (The performance from Mariko Tsutsui as Ichiko — light and dark — is superb.)

Initially, this double narrative is intriguing, but confusing. It’s actually the scheming Ichiko we meet first, ingratiating herself with a new hairdresser. Then the story moves into the recent past and introduces Ichiko the respected nurse, and you’re left guessing how they are connected.

Until the pieces begin to fall into place, a viewer is unmoored and uncomfortable, and we mean that in the best way.

This is slow, intense and graceful storytelling that covers a lot of ground between public and private selves. Fukada directs and co-wrote, and here seems to be examining notions of shame, keeping face, social standing and the great risks involved in love and intimacy of any kind, particularly for women.

It’s an interesting mix of artifice and anguish, with just a touch of absurdity. Much of the plot rests on Ichiko’s complicated relationship with Motoko, the older of the two young women she mentors. Both women are self-protective and deal in emotional dishonesty to some extent. Motoko hides things from others; Ichiko seems to hide things from herself. Conflict comes out of that dishonesty.

Conflict comes courtesy of men, too, in this story. The nephew’s crime plunges the women around him into a personal hell, although he and his wrongdoing are never the focus — the fallout afterward is. And that fallout continues until the last frame.

A Girl Missing is imperfect but engaging, part character study and part psychological thriller. The film is in Japanese with English subtitles.