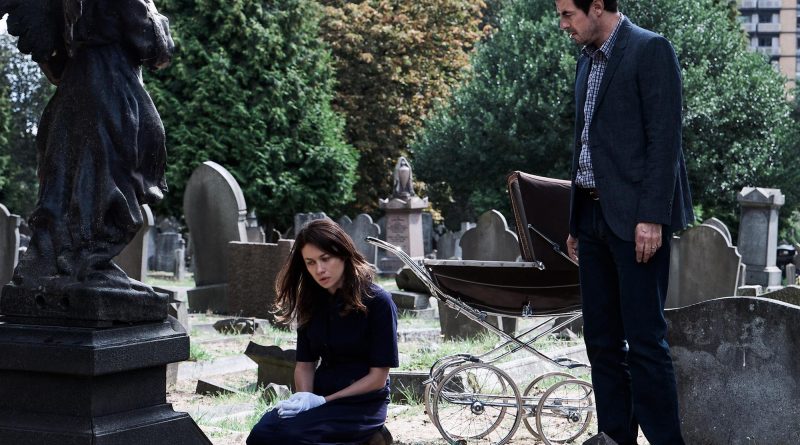 A slow-burn psychological thriller directed by Paula van der Oest (2001’s Oscar-nominated Zus & Zo), The Bay of Silence opens in the Liguria, Italy, where attractive young couple Will (Claes Bang), a civil engineer, and artist Rosalind (Olga Kurylenko) are enjoying an idyllic swim—idyllic until Will briefly vanishes under the water. Rosalind’s panicked response seems a bit disproportionate, but all is forgiven when he surfaces and proposes marriage.

Eight months later she’s hugely pregnant with her third child—she already has twin daughters–and they’re having a house-warming party in the spacious yard behind their beautiful London house, attended by her wealthy divorced parents, Milton and Vivian (Brian Cox, Alice Krige) an event shattered when Ros falls from a second-floor balcony as she’s taking a photo. Her baby, a boy they name Amadeo, is delivered by Cesarean, and she makes a full recovery—physically, at least.

She has nightmares, begins sleepwalking and keeps asking what happened to her other baby: She’s convinced she was carrying twins. Things come to a head after Rosalind gets a package from France that bears no return address; when Will gets home from work he finds her studio trashed and his wife and the children gone. Milton confides that he knew she was leaving but won’t say where she’s gone, but after discovering that the mysterious package contained a camera case with strips of negatives concealed inside the lining, he travels to Normandy, where Rosalind spent the summer as a teenager and was photographed by her mother’s stepbrother; there’s also a small print THAT has the enigmatic words “I forgive you” written on the back.

Will finds Rosalind and the girls, but baby Amadeo is dead and Rosalind has had a breakdown; after bringing what’s left off his family home Will is compelled to dig into his wife’s past and eventually uncovers a serpent’s nest of family secrets and lies. While the film’s underlying subject–the poisonous legacy of childhood abuse–could be called lurid, Van der Oest and screenwriter Caroline Goodall (adapting a novel by Lisa St. Aubin de Teran) keep the focus firmly on the characters, with Bang and Kurylenko delivering nuanced performances as Rosalind and Will. Both give their characters surprising depth given that the film maintains the swift pace of a thriller, and the beautiful production design and cinematography never detract from the ugliness of their experiences.