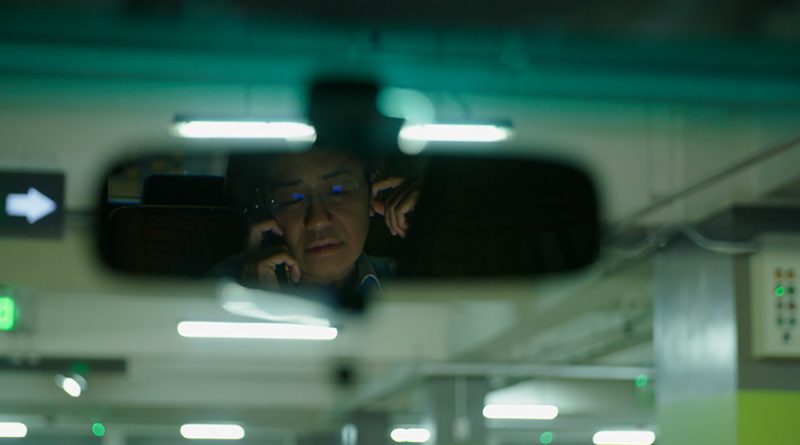 So timely that it includes scenes filmed just a few weeks ago that show people wearing masks against the coronavirus, Ramona S. Diaz’s documentary A Thousand Cuts is a passionate call to arms. Centered on persistent, feisty Filipina journalist Maria Ressa and her fearless pursuit of the truth behind the Philippines’ President Rodrigo Duterte’s brutal, extrajudicial war on drugs, it will resonate with anyone who cares about preventing authoritarian attacks on the freedom of the press. 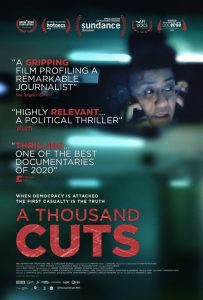 Ressa — an investigative journalist who spent much of her early life in the United States, formerly worked for CNN, and was part of a group of people named as Time‘s person of the year in 2018 — is the co-founder of Rappler, an online news organization in the Philippines. When Duterte comes to power in 2016, he finds Ressa and her team to be persistent in their questioning of his methods and priorities — a persistence that continues despite every challenge he can throw their way. He tries to get Rappler’s business license revoked, alleging that it’s owned by Americans (not true). He calls Rappler’s stories false and ensures that she’s arrested for cyberlibel — a crime she was convicted of in June 2020 but is appealing.

As Ressa’s story plays out over the course of A Thousand Cuts — the film’s title comes from a statement Ressa makes about how Duterte and his regime are killing the nation’s democracy slowly but surely — her fellow Rappler journalists face their own challenges as they try to report the bloody impact of Duterte’s relentless, violent approach to drug-related crime. And on the other side of the divide, girl-group-singer-turned-Duterte-appointee Mocha Uson uses her social media savvy to spread disinformation and decry outlets like Rappler as “fake news.” (Just think of her as a Filipina Kayleigh McEnany.)

The documentary takes place almost entirely in the Philippines, but the situations and conflicts that Diaz captures in A Thousand Cuts will likely feel eerily familiar to viewers in other countries whose democracies are being threatened by nationalism and burgeoning authoritarianism — including the United States. More and more frequently, it seems, those who seek the truth are being silenced by those in power. That’s why, like Ressa, we must consider it our duty to keep fighting, to stand up for the countries we love and make sure they aren’t lost to us forever.– Betsy Bozdech

Marina Antunes Ramona S. Diaz’s A Thousand Cuts is an eye-opening, heartbreaking but also inspiring documentary about one woman, journalist Maria Ressa, and her continued fight to galvanize a country into fighting back against the continued and oppressive campaign of disinformation which has claimed the Philippines and threatens to topple the country’s democracy. An engaging, must-see documentary, particularly prescient in light of the events unfolding in the US.

Pam Grady: “If you end up dead, it’s your fault,” so says Philippine populist president Rodrigo Duterte on the campaign stump, a warning not just for the drug users and dealers whose bodies have littered the streets of the nation in the four years of his regime, but also for the journalists with the courage to question him. Ramona S. Diaz’s powerful documentary focuses on one such crusader, Maria Ressa, a woman who puts pursuit of the truth above her own freedom and safety. While Diaz covers the Philippine elections of 2019 and in particular a Senate race that is a Duterte lieutenant’s election to lose, the lens she uses is that of the Rappler, Ressa’s news magazine. She and her staff risk arrest and invite death threats with every story that reveals more of the ugly truth of Duterte’s authoritarian rule. The documentary is both a celebration of Ressa and her journalists and a cautionary tale. This is how democracies die, one muzzled reporter at a time.

Kathia Woods First Amendment: “Congress shall make no law respecting an establishment of religion, or prohibiting the free exercise thereof; or abridging the freedom of speech, or of the press; or the right of the people peaceably to assemble, and to petition the Government for a redress of grievances.” This is what is written into the Constitution of the United States. The founding fathers knew that one of the components of keeping a democracy is freedom of the Press. A Thousand Cuts beautifully demonstrates how the government in the Philippines is working diligently to get rid of any opposing press, particularly award-winning journalist Maria Ressa who runs Rappler. The similarities between Philippines president Rodrigo Duterte and American President Donald Trump are scary. Both use the press and social media to demonize their opponents. A Thousand Cuts shows how when you attempt to silence free speech a democracy dies. Pay attention fellow citizens this film shows how if we’re not vigilant we may find ourselves with journalists disappearing in the middle of the night.

Leslie Combemale Two thirds of the way through A Thousand Cuts, journalist and central subject Maria Ressa finally brings up what viewers will be thinking from the beginning. Ressa lives in Manila, and her sister chose to make New York her home. “It’s ironic that even though our choices are different, our nations have the same type of leaders; macho, populist, sexist at best, misogynistic at worst. They both use anger and fear to divide and conquer. They’ve created a politics of hate.” Ressa is fighting for freedom of the press and reporting on President Rodrigo Duterte’s corruption, extrajudicial violence in what he calls ‘a war on drugs’, and the lies he spews daily, inciting his followers to send Ressa death threats and messages of hate. Though her country appears to be on the brink of losing rights to free speech and public safety, the film, and Ressa’s struggle, will also be terrifyingly familiar to Americans living through a Trump presidency. With A Thousand Cuts, director Ramona S. Diaz has created a compelling profile of a heroic but humble journalist, but might also awaken the inner activist in more than a few viewers, regardless of where they live.

Jennifer Merin Ramona S. Diaz’s compelling documentary about heroic journalist Maria Ressa and her ongoing crusade for freedom of the press and truth in media in the Philippines is a revelation. In reporting on president Rodrigo Duterte’s extrajudicial war on drugs, Ressa persists in exposing the regime’s heinous corruption, misdeeds and blatant disinformation and lies fed to the people via the media. Ressa, founder of the country’s leading website, Rappler, is under constant threat from the government. She’s been sued, arrested repeatedly and constantly receives hate mail threatening rape, murder and the bombing of her office. Last month she was found guilty on specious charges of “cyber libel” and now faces years in prison. Her sentencing will be in several months.The film shows what happens when a strongman president threatens democratic procedures (remind you of anyone?). But Ressa, honored as a TIME Magazine Person of the Year in 2018, continues to defiantly advocate for the right of free speech as Duterte tries to silence her.

MaryAnn Johanson A horror story and a cautionary tale, Marie Ressa’s journalistic odyssey against the corrupt, murderous anti-democracy forces in the Philippines is a shocking mirror held up to the United States, the United Kingdom, and other nations succumbing to far-right nationalism. Her unflagging optimism in the face of abuse and authoritarian overreach is small comfort, but we’ll take that lesson from her and hope — as we fight — that we can divert ourselves from a similar path.

Cate Marquis In this documentary, journalist Maria Ressa reports on a corrupt Philippines political scenario that’s strikingly familiar, but the moment that may cause chills to run down your spine the expose that Cambridge Analytical used the Philippines as a testing ground for social media propaganda and then ported the technique to the US. Read full review.