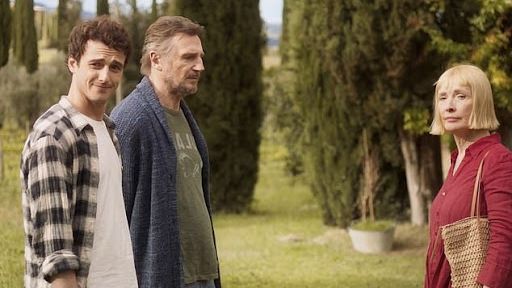 Life is one continuous curve ball, as most of us will at some point hit the depths of despair in grief to the soaring elation of realizing you are fully in love. The in-between stuff of money, navigating a divorce and home renovation is where filmmaker James D’Arcy revels in Made in Italy, a tale of reinvention as much as it is a romantic redo, or a father-and-son buddy dramedy.

It is made all the more poignant by the fact the lives of the two leads, Liam Neeson and his son Micheál Richardson, parallel those of their characters. Both lost their wife and mother respectively in a shocking sudden death. In many ways this film feels like a cathartic reckoning of Natasha Richardson’s 2009 death and the effects it had on both men.

D’Arcy’s filmmaking debut is a lilting and light hearted look at a father and son coming together to raise money after they’ve been estranged for some time. The money is for son Jack’s bid to buy his art gallery interests from his soon to be ex-wife.

However, the complex process is further hampered by the secrets and memories the deceased mother’s ancestral fixer-upper home still holds in stunning Tuscany, brought to breathtaking life by the capable DP, Mike Eley.

Tuscany is as much a character in this escapist film as are the humans. Made In Italy is as much a father-son story as it is a reevaluation of life’s priorities and what and how one wants to live life.

Italy and Tuscany in general have a notorious reputation for making converts to its breathtaking “religion” of how life should be lived, and the joys of good food, stunning vistas, agreeable climes displace their initial goal of home renovation for a fast resale of the family house they’ve inherited. The Herculean task of repairing this stately manse falls upon the two, and the nature of their presence does not go unnoticed by the townsfolk, especially Natalia (Valeria Bilello), a local chef who finds herself fancying Jack.

One of the notable performances in Made In Italy is the deft comic relief subtly slung by real-estate expat Kate (Lindsay Duncan), whose turn of phrase, and effortless sly wordplay and chemistry with Neeson are wonderful. She’s a fierce secondary character worth mentioning.

There are no shock twists or gruesome murders to solve here, this is a straight-up romantic romp that resolves deeply buried grief and reunites a father and son who miss each other. They both need resolution to the sudden loss of the woman who made their faraway Italy reunion possible.

As it goes with adult love stories, there are no easy pathways to love made lovelier the second time around, with niggling details like ornery ex husbands, busy London calling, and the rebirth of an artistic career shelved when personal calamity struck.

If you want to get lost in a lovely and moving little film, Made In Italy is a comforting bowl of risotto with extra butter and Parmesan cheese, uncomplicated, filling and decidedly simple and satisfying.