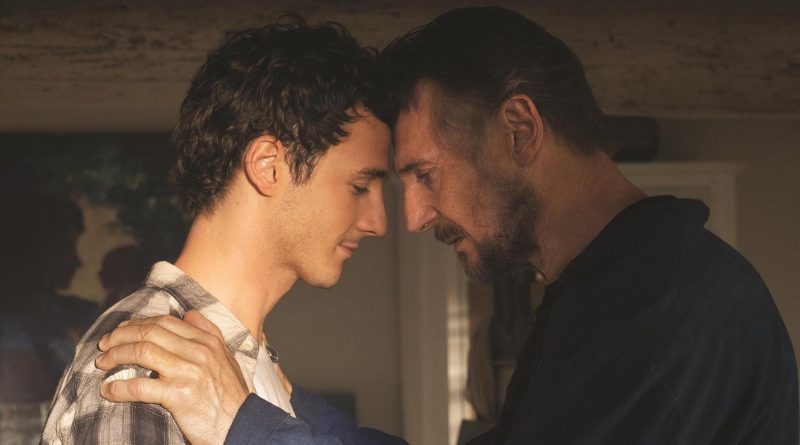 That estrangement came about soon after Robert’s wife and Jack’s mother died. She willed them her house, with its stunning prospect in the Tuscan hills. The two come together to sell it. Jack has not been back there since he was seven, but he needs the money to buy the art gallery he runs for his wife, soon to be ex- (who sports one of the finest French twist hair-dos in film history). Jack’s work in that gallery is an attempt to make a living peripheral to his artist father’s career. That career is stalled like their lives, ground down to dancing around one another.

To sell the house, they have to fix it. It’s a lira pit. But Kate, the real estate agent, insists it be rehabbed. She is played by the brilliant Lindsay Duncan. Listen to her hiss “shrew” when Robert notes that her name’s the same as the character in a Shakespeare play, “The Taming of the….”

Robert is played by Liam Neeson, Jack by his son, Micheál Richardson, who adopted his mother surname when he, too, joined the great acting tribe of the Richardsons and Redgraves. Yes, it’s uncomfortable to watch pere et fils act as father and son, given what we know about Natasha Richardson’s tragic death 10 years ago. It’s also curious to watch the 6’4″ Neeson look down on his son — a mere 6’2″. The actors work their way through James D’Arcy’s script wherein the screenplay has Jack speaking eloquently (perhaps unrealistically) about grief. Under D’Arcy’s direction, the two men’s acting ranges between distant and fiery — but not always believably.

The art of the film feels too close to the lives of the actors for an audience to gain a proper distance. Still, the Tuscan hills make up a tad for the valleys of the plot. Made in Italy weaves in and out of Life and Art, but its seams bunch a bunch.