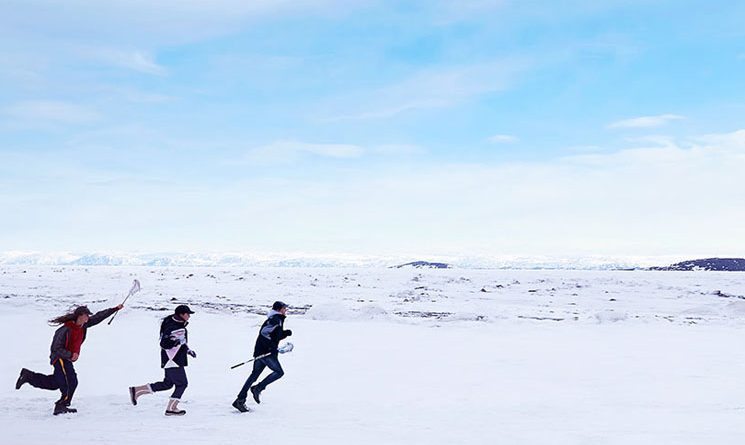 From the opening title sequence featuring vintage photos of the Inuit of the Canadian Arctic, The Grizzlies is rich in cultural specificity and in an atmosphere that’s both gritty and beautiful. The remote Canadian town is bleak and barren save for a few desolate shacks where kids with no futures commit suicide at alarming rates and where adults regularly pass out drunk on sagging sofas. Into this grim world strides young, assured history teacher Russ Sheppard (Ben Schnetzer) like a preppy To Sir With Love. He’s taken the job at Kugluktuk High School to pay off his college debt to the Canadian government but plans to leave for a tony prep school in a year. His lifer colleague Mike (Will Sasso) warns Russ that he’s ended up at the end of the world where food costs nearly a week’s paycheck and where the students are surly and unmotivated and for good reason: most of them live in abusive families; some have to hunt wild game to eat; hopelessness is as rampant as alcoholism.

The lacrosse stick Russ carts around is like a huge neon sign — pretty soon he’s convinced his charges that the game, with its indigenous origins, can save them the way it saved him in college. Director Miranda de Pencier wisely keeps the focus less on Russ and more on the scrappy, troubled players. Each is given a backstory and emerges as multidimensional. The team is boys, mostly, but it also draws shy Miranda (Emerald MacDonald) from her shell as she becomes a clipboard-toting manager, fundraiser and the one who schools Russ on Inuit ways. The Grizzlies follows underdog sports movies formula as the team travels to Toronto for a championship.

Despite this familiarity, the film never loses its originality or power. Sports and teacher/savior cliches abound in The Grizzlies but that doesn’t make this based-on-truth movie any less enjoyable. Instead, the film embraces and transcends the sports and inspirational movie cliches. We may know where we’re going from the start but the trip is well worth the ride.

Stick around for the end credits which reveal the characters’ real-life counterparts in a touching closing sequence.