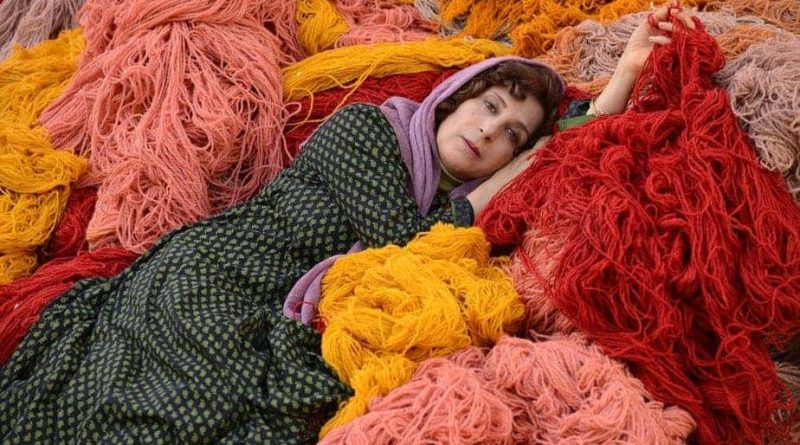 This week’s Movie of the Week is African Violet, a winsome femme-helmed narrative from Iran that reveals an intimate view of family life from a woman’s perspective.

Directed and co-written by Mona Zandi Haqiqi, the film centers around Shokoo (Fatemah Motamed-Aria), a middle aged housewife who is very attached to the idea of doing the right thing.  She has a good life with Reza (Saeed Aghakhani), her second husband, with whom she shares household chores and works the family’s home-based wool-dying business. Shokoo is deeply troubled when she finds out that her ex-husband Fereydoun (Reza Babak) — from whom she’s been divorced for years — has been placed in a nursing home by their daughters. She decides spring him from institutional living by bringing him to the home she shares with Reza and caring for him there. Reza has agreed to this, but is really not happy with the idea.

Fereydoun arrives at Shokoo’s home in a wheelchair and is basically non responsive, but he quickly recovers both his will and ability to speak and to walk around the two-story house. As he becomes more of a presence in the household, past truths begin to surface and domestic tensions rise. Ever patient and self-composed, Shokoo tries to mediate the environment of unspoken discord by soothing her two troubled men with gentle attentiveness and heaping servings of good food.

The complicated emotion-laden relationship between the three of them is compellingly authentic, and extraordinary kindnesses are expressed when least expected. And, truly, it is the fundamental kindness of this film that completely engages and enthralls you.

African Violet is exquisitely envisioned and crafted so that carefully composed images replace wordiness in conveying the story. With their beautifully nuanced performances, the actors express profound emotion with subtle looks and gestures that replace incessant dialogue. Natural sound prevails in establishing environment without an ongoing stream of music. Cinematographer Farhad Saba holds the camera on the actors’ faces just long enough to allow you to read their thoughts, and this shooting style is fully supported by Bahram Dehghani masterful editing.

EDITOR’S NOTE: African Violet is AWFJ’s Movie of the Week for August 21, 2020