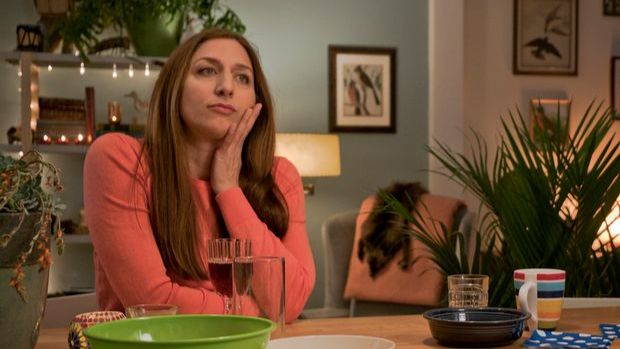 Do you need a love life to love your life?

That is the question — answered, in lightly and ultimately likable fashion, in the romantic comedy Spinster.

Make that semi-romantic, because Spinster has a bit more on its mind than the lovelorn title character’s marital status. Eventually.

“OK, you’re young, so I feel I have to tell you that there’s no such thing as a real-life fairytale,” Gaby comments, noting “marriage started as a contract of ownership and now it’s kind of evolved into, at best, gross consumerism and at worst, a tax cut.”

Needless to say, Gaby doesn’t get the job. She returns home to find her live-in boyfriend moving out, boring board games in tow. Oh, and did we mention it’s her 39th birthday?

No wonder the self-proclaimed spinster seeks solace from her best friend, married-with-kids Amanda (Susan Kent), who reassures Gaby that, “as a society, we’ve progressed to the point where we can forget the word ‘spinster.’ “

The word may be antiquated, but the judgment it implies certainly isn’t, considering how Gaby’s marital status seems to preoccupy almost everyone she encounters.

During the final year of her 30s, Gaby doggedly searches for someone who meets her high standards — or even her low standards.

But spending time with others — from her geeky niece (endearing Nadia Toner) to a free-spirited neighbor (sassy Kate Lynch) — convinces Gaby to pursue some life goals that don’t involve Mr. Right, or even Mr. Right Now.

Occasionally, comic exaggeration punches up the humor. In one wordless scene, an amusingly appropriate low camera angle captures a deflated Gaby dwarfed by an inflating air mattress in her suddenly empty apartment. And an extended montage of first-date repartee (“Maybe ascots will make a comeback, who knows?”) showcases Deyell’s quick-quip capacity, along with Dorfman’s snappy timing.

For the most part, however, Spinster (filmed in Halifax, Nova Scotia) sticks to the understated but understandable lesson Gaby eventually learns: Stop trying to justify your life to others and just start living it for yourself.