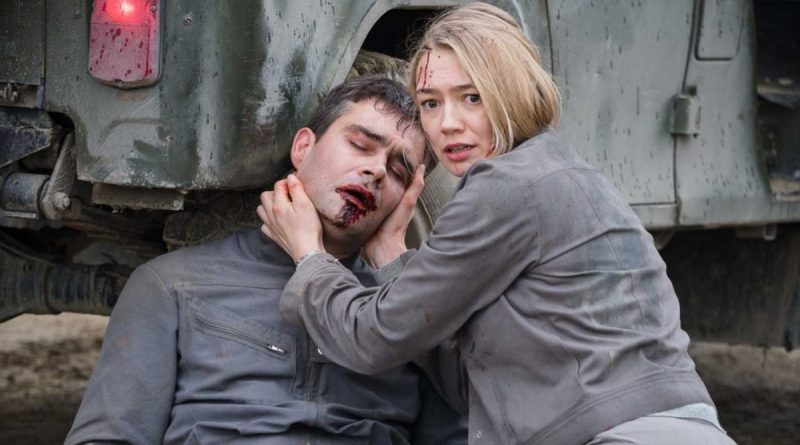 From time to time a film journalist gets the sense that everyone up and down the PR chain is proud of what they’re promoting. Given that new release Sputnik is both a horror film and in Russian, I was pretty surprised by their confidence. When I said I was curious about seeing it, I immediately got not only a link, but press notes, and a hearty ‘ENJOY’, which is not the norm. The film won me over quickly, and by the end credits, I could understand their enthusiasm. Director Egor Abramenko’s Sputnik adds a cold war paranoiac twist to the alien monster genre, largely replacing the alien spaceship horror-house framework with the institutional bleakness of 80s era Russia. It works.

Looking at the landing site of spacecraft Orbit-4, it’s clear something very bad has happened. The only surviving cosmonaut has no memory of the last moments before the crash. He is taken to a remote government facility and watched by armed guards. Renowned, no-nonsense psychologists Tatiana Klimova (Oksana Akinshana) is brought in to examine the survivor and determine his mental state. She very quickly discovers her patient has a problem she’s never faced. The word sputnik means ‘travelling companion’, and unfortunately, that’s what the cosmonaut brought home with him to Earth. He is housing a parasitic alien that may kill him, and it’s up to her to figure out whether they can be separated. She is surrounded by scientists and military men who have other priorities, putting the cosmonaut in mortal danger.

One of the great reliefs and joys of Sputnik is the representation and portrayal of psychologist Klimova. She is fearless, practical, and empathic, creating a complex character that allows for a very specific, individual definition of womanhood or femininity. She is put into the position of trying to save the cosmonaut, but also protect the creature inside him, which calls upon her to use the instincts of a mother, a scientist, and a compassionate humanist. Never sexualized, the character isn’t expected to call upon the use of those ‘feminine wiles’ we so often see in horror films.
Always prepared, always dressed for the task at hand, she blows through her days laser-focused on finding solutions, even as they require her to completely realign her understanding of what existence means, or what it means to be human.

The relationships built through the story are based in an authentic truth, whether they are adversarial or in accord. Even between Klimova and Veshnyakov, the head of what is clearly a clandestine facility, there is an understanding, even if that may lead to someone, including her, being murdered in their sleep. It’s also worth mentioning that the film doesn’t sugarcoat the way Soviet Russia treated their citizens, or for that matter, approached their spy craft.

There is a creepy pall over everything in Sputnik. It has an intentional sparseness and frigidity that might put off viewers if it weren’t for the counterpoint that Akinshina as psychologist Klimova brings to every scene. She builds her character as a badass for the ages, and does it without ever holding a machine gun. She does it with brains, fearlessness, and compassion. With Sputnik, you might come for the alien, but you’ll stay for the heroine.