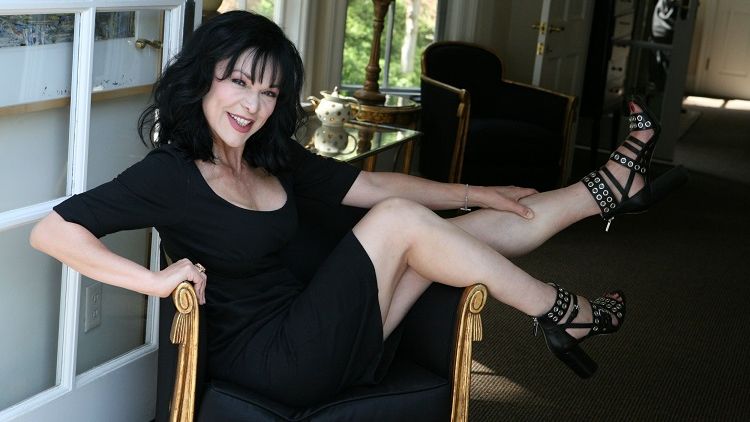 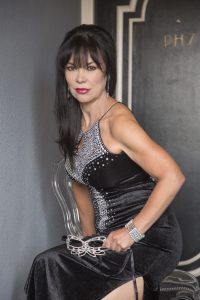 Monique Marvez is an author, comedian, podcaster, radio host and well known rescuer of pound puppies headed for the big goodbye. She’s a comic’s comic and a populist all-around star player. Ask anyone who has crossed paths with her, she is a fiercely intelligent and funny woman who has worked with Barry Diller, Dick Wolf and served as San Diego’s top voice on Jack FM’s Monique and the Man, a show moniker we learn that was inspired by her Latin comic idol, Freddie Prinze.

HBO Max brings this hot tamale to the stage with a range of other Latinx comics this August 20 for the HA Comedy Festival. But Marvez really WAS a Hot Tamale, thanks to entrepreneurial producer Eva Longoria—one of the HA Comedy Festival hosts—who created a travelling revue of the best Latinx female comics along with Kiki Melendez who curated, performed and emceed the groundbreaking affair.

Marvez is a killer on-stage, so much so that Snoop Dogg features her in his Bad Girls of Comedy Showtime special, on the heels of her 2007 starring role in the Original Latin Divas of Comedy.

The success of both of these comedy specials netted her a Netflix-aired one-woman show titled Not Skinny Not Blonde, produced by Scott Montoya.

Now a whole new age group of fans are discovering Marvez’s stopwatch wit and charisma thanks to COVID and YouTube, hungry to hear how she wraps truthisms about the differences between men and women up in what she describes as “tasty bacon.”

The new HBO Max show was shot at the iconic Empire Theater in San Antonio, TX, as Marvez joins a cast of comics with Latinx comedian and actress Anjelah Johnson as host. 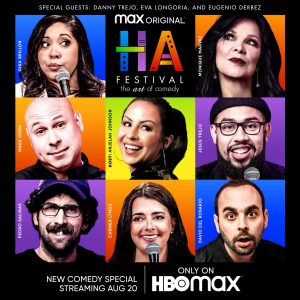 HA Comedy Festival: The Art of Comedy is a one-hour multi-act stand-up special that showcases “the best of the fest” which brought together a line-up of the best Latinx talent.

Monique Marvez: Well, it’s funny, you should say that I was just in Colorado Springs and Jeff Valdez who started the Latino comedy festival [about] 20 years ago.

And I was at the first one…. And that seems like a million years ago. Fez had just gotten That Seventies Show and was a kid, Wilmer Valderrama. I remember seeing him on the dance floor at the after-party. Jeff and I go back to his club, he had a club in Colorado Springs. I was there the weekend, he sold it.

So we have a deep history and Jeff has always championed minorities, women, and I was so grateful that over time, I knew that the right opportunity would come with the right person and everything kind of comes together in this perfect storm.

I like to think that in the back of his mind, he’s a little bit like a jeweler, where he could put the right jewels in the right crown. And I have to tell you, I was set up. He put me right in the middle of the best place that he possibly could for me. It’s very exciting.

Neale: New Cadence Productions, they’re promoting this as Latinx talent. Now I want to ask you an honest question. Do you refer to yourself as Latinx? 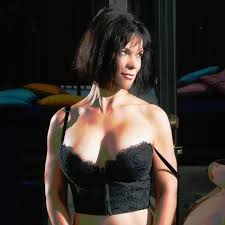 Marvez: No, but I don’t even refer to myself as Latina. And I don’t even call it race because Latin isn’t a race. But I remember having a big “who shot John” [meeting] about doing the Latin Divas of Comedy, because I liked that it said the Latin Divas and not the Latina Divas, because I think the whole idea of Latinx is it goes back to this whole trans thing that’s going on now, which is neutral gender or that it’s not male or female. You’re just Latin.

Neale: Talk about Eva Longoria’s place in your career arc… she has played a part…

Marvez: I can picture it, I was in Monterey doing a gig at Planet Gemini back in the day when you had pagers and someone would page you or whatever. And I remember having this old pager and cell phone and Kiki [Melendez] left a message and said, ‘call me girl.’ 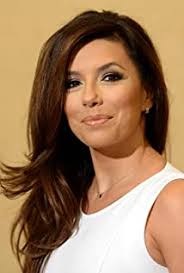 And at the time of the group, I was the only one that was a touring headliner that was playing clubs like the Improvs. I wasn’t playing the “I’m the Latin comedian…” I was just an A-headliner doing Vegas, the Improv, et cetera.

Kiki invited me. I was one of the founding members of Hot Tamales. That was so long ago, I think 2003.

Neale: This is like a really unusual time to be a comic. I remember Sam Kinison who I’m sure would have been “me too-ed” right off the planet just like Louis C K. It’s a really strange…

Marvez: I got news for you. Almost every male comic and club owner has probably at some point said, please, God, don’t let her come forward? And I don’t mean me. I mean, rhetorically,

Neale: Right? Yes. I believe that I’ve been around too. I worked with Sam Kinison when I was at TRIAD Artists, and the whole landscape of comedy, like Twitter. Now, if you put something out and people misinterpret what you’re saying, just the wrong way. All of a sudden, it’s a killer bee swarm…

Marvez: It’s a treacherous landscape for sure. And I’m grateful that I’ve navigated it carefully for many, many years now.

Neale: What’s the biggest aggravation about being a female comic?

Marvez: Having people walk up to me and say, you’re funny for a girl [laughs]

Neale: Your background is Cuban and Puerto Rican?

Marvez: Correct with that. And my dad was Puerto Rican Venezuelan, but he really identified more with the Venezuelan, which was his father, which is where he spent more time…

Neale: Do you feel that that background has ever held you back in any way?

All I know is that whenever a door opened for me, I ran like hell through it, without any trepidation, like the minute somebody said, can you, would you, are you available? I would say yes. Before I’d even asked the terms. Like, I was never one to say, ‘well, how much will you pay me?’ Or ‘who else is on the bill?’ 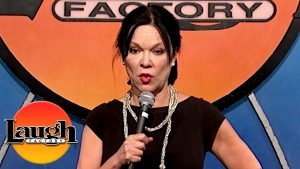 I’ve just always been one to run my ass off through any cracked door that I could. I’ve been blessed. I mean, I’ve had a very storied career. My second job in radio was the million dollar morning show. My first job in radio was getting hand plucked by Jimmy Steele. who is a legend who, you know, programmed Power and Hot (FM). And my first pilot script was for Dick Wolf. My first local TV in Miami was for Barry Diller. I don’t know that anything has hurt me.

Neale: What’s on the horizon for you?

Marvez: I call myself the Yoda of vagina. And what I tell people is that, if you consider a certain group of comics, Bobby Collins, George Wallace, if you consider those guys right now, sort of the Rat Pack of comedy, I’m Angie [Dickinson], I’m still hot. I’m still relevant. I’m the chick, I’m the broad [and] I get to be with the cool guys.

I feel like right this minute, and I can tell you the offers for work are pouring in. I think it’s because I’ve been this equal voice of I’m not political, I’m patriotic.

I tell people, I have all these little catch phrases that people, like I said, I’m not a Kool-Aid drinker. I’m a big picture thinker. Or when I do my 3:30 Show on Facebook live, I say, we’re creating a rhythm from no rhythm. I just have this knack for little phrases and people are searching for positivity. And in a way, comedy can be a secular religion.

I think the reason why the whole mythology of superheroes has gotten so huge in the last few years is because the young people, Gen Z and the younger millennials, they don’t see anybody over 35 who isn’t full of crap. So when they see me, they’re like, Oh my God, you made it to your age and you’re not jaded? And you’re excited and you’re looking forward and you’re hot and you’re sexual. And you’re fun. Are you kidding me? Like game on, game on. So it’s the kids that have put me on the map, watching me on YouTube during COVID my Snoop Dogg set, LOL Flix Scott Montoya released it, the whole set onto YouTube at the beginning of COVID.

I have 900,000 views. And it’s the kids that reach out to me and say, I just, I can’t tell you how many times a day I get messages.’I just found you, how can that be? I’m binge watching you.’ Amazing. Like I say, COVID has been this weird left-handed blessing for me.

Neale: What Latin comics from your earliest memory? I know prior to this chat we talked about Walter Mercado and how much he meant to us and our grandmothers. Who was the comic in the Latin world that…

Marvez: I’m not even going to let you finish the sentence. Freddie Prinze, Freddie Prinze was the first celebrity death that devastated me. I remember laying on my father’s couch just sobbing because I loved everything about him.

Neale: I don’t know if you want to go there, but is there a list of comics or personalities in the comedy world that you’re kind of glad to see put on the back burner?

Marvez: You know, I’m a big believer that good ideas grow and bad ideas collapse under their own weight. So whenever I see somebody in the comedy world that I feel is… you know, I’m going to reverse your question if that’s okay.

Years ago, my friend Sadiki Fuller—rest in peace—came to me and was like, ‘how do you know when you’re a headliner?’

And he was sort of asking all these questions about comedy, blah, blah, blah. I stopped him. And I said to Sadiki, ‘here’s what I want you to think’ to paraphrase John F. Kennedy… Ask not what comedy is going to do for you. What are you going to do for comedy?

What’s the interesting way you’re going to twist a bit? What have you written today? Who are you mentoring? What are you bringing to this entity? Because comedy isn’t here to do something for you. You’re here to add to the art form.

So whenever I see people that I believe are using comedy just to get seen or to land a show or to be salacious or shocking, all I can think of is that comedy is this wonderful entity, like a country like America, I’m very patriotic about comedy.

And you know, and I hold it, it’s sacred to me. It’s not a job. It’s a calling. It’s a blessing. And when I see people that don’t feel that way. I know ‘Eh, you’re not going to last. I’m not worried about it.